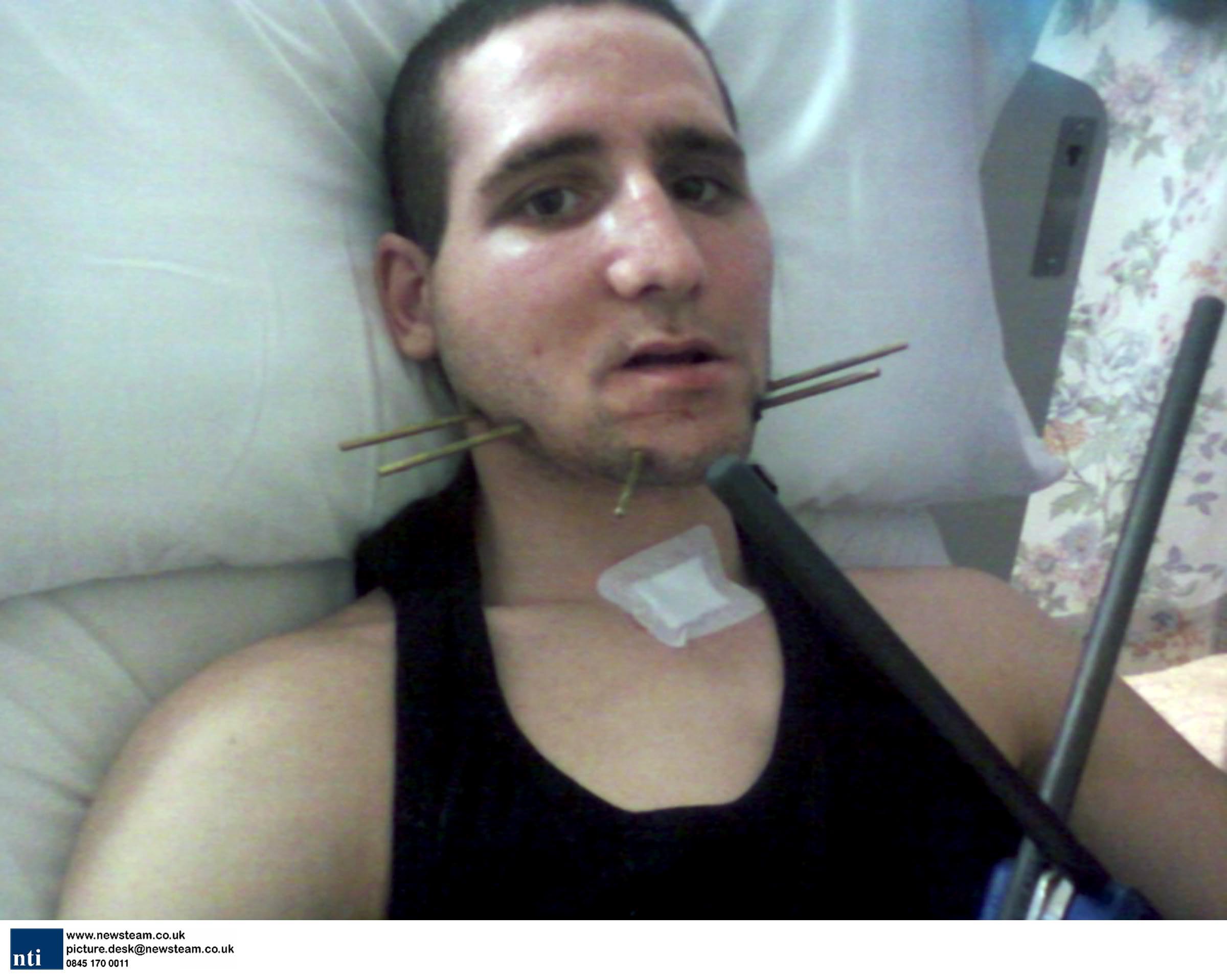 A FATHER has survived after falling 100ft from his ninth floor tower block home in Ward End, Birmingham.

Miracle man Angelo Nicotra smashed nearly every bone in his body as he plunged onto the cold concrete pavement three days after Christmas.

Yet the 22-year-old can now walk again after undergoing eight operations at Heartlands Hospital and is set to return home today.

Speaking from his hospital bed Angelo said: “It makes you think about life and everything you have got. I can’t believe I am well enough to walk again.”

His surgeon Andreas Sambatakakis said: “We expect Angelo to make a good recovery. He is very lucky to be alive.”

A DAD of one smashed nearly every bone in his body when he plunged over 100ft from the ninth floor of a Birming ham tower block.

But Angelo Nicotra has cheated death and made a miraculous recovery from his fall from Oast House Flats, Grumbleberrys Close, Ward End.

The 22-year-old shattered his ankles, pelvis, arms, heels and even his jaw when he fell out of his window and landed on a con crete pavement below three days after Christmas.

Heartlands Hospital medics have worked night and day to get him back on his feet, operating on him eight times.

But his physical condition is a far cry from the energetic young man who was proud of his toned, muscled body before the fall changed his life.

Angelo is now finally ready to leave Rowan Ward at the Bordes ley Green hospital, run by Heart of England NHS Foundation Trust, for the first time in three months, and is due home today.

Speaking from his hospital bed Angelo, who has a seven month old son called Angelo Junior, said he fell after he took sleeping tab lets, and believes he must have been hallucinating on December 28.

He said he took the pills because he had been feeling depressed over relationship problems and not being able to find a job.

“I think I must have been hallu cinating. I can’t remember the fall at all and just remember waking up in hospital,” said Angelo, who grew up in Small Heath and went to Holy Trinity Catholic Second ary School.

“I broke nearly every bone in my body and it has been a long slog. I had to have two metal rods com ing out of my pelvis and I didn’t know if I would ever walk again.

“But I survived and that makes you think about life and every thing you have got. I’ve got a son and I will be here for him.

“I was very depressed and had been back and forth to the Job Centre with no joy and no calls before I fell.

“But lying in hospital for three months with huge pins sticking out of my bones and a cage around my jaw has made me realise how important life is.

“I can’t believe I am well enough to walk already and to get out of hospital.”

Mr Andreas Sambatakakis, Consultant Orthopaedic Surgeon, carried out many of the operations on Angelo and said he was “lucky to be alive”.

The doctor said intricate operations were carried out to carefully fix pins into all of the his limbs, each of which had all shattered in the fall. He said surgeons, used special rods to fix the bones in both of Angelo’s feet into place.

They had to do the same with his arm, left hand, pelvis and face during lengthy operations so that the bones would then have chance to heal in the right position, and give Angelo a second chance to walk and live a normal life.

“Angelo has been at Heartlands for three months and has made a miraculous recovery so far,” said Mr Sambatakakis.

“Having broken nearly all the bones in his body he suffered severe damage to all four limbs and was in a life threatening condition when he arrived in hospital.

“After numerous operations, a daily routine of intensive physiotherapy and a number of courses of antibiotics he is making great progress and we expect him to make a good recovery from his injuries.”

“Looking at the extent of Angelo’s injuries he is certainly lucky to be alive.”