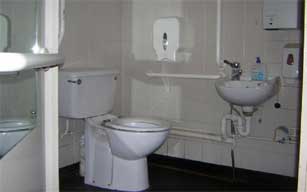 A WOMAN resigned from her job after her bosses held a meeting to discuss her targets – in a disabled toilet.

Alison Jewson claimed she was forced to leave her job as an administrator with a debt collecting firm following the incident.

She complained she was forced to resign for a number of reasons, including the disabled toilet being used as a meeting room to discuss her work targets.

Tribunal judge Rob Broughton told the firm that he had reservations about the toilet being used for a meeting.

He added: “But the tribunal does not believe it should be a reason for Miss Jewson resigning.”

Mr Broughton agreed, however, that Miss Jewson had complained about other reasons for resigning from the firm.

Miss Jewson complained she was accused of not reaching work targets and alleged she was not given enough support.

She also complained of an increase in duties to raise benchmarks in work output.

The firm successfully opposed her compensation claim after telling the tribunal it did all it could to help Miss Jewson with her work.

Mr Broughton described Miss Jewson as a hard-working administrator but said her compensation claim had failed.

Speaking after the tribunal Miss Jewson said: “The toilet was cramped with room for only three or four others and we all had to stand. The firm said the toilet was the only available room at the time.”