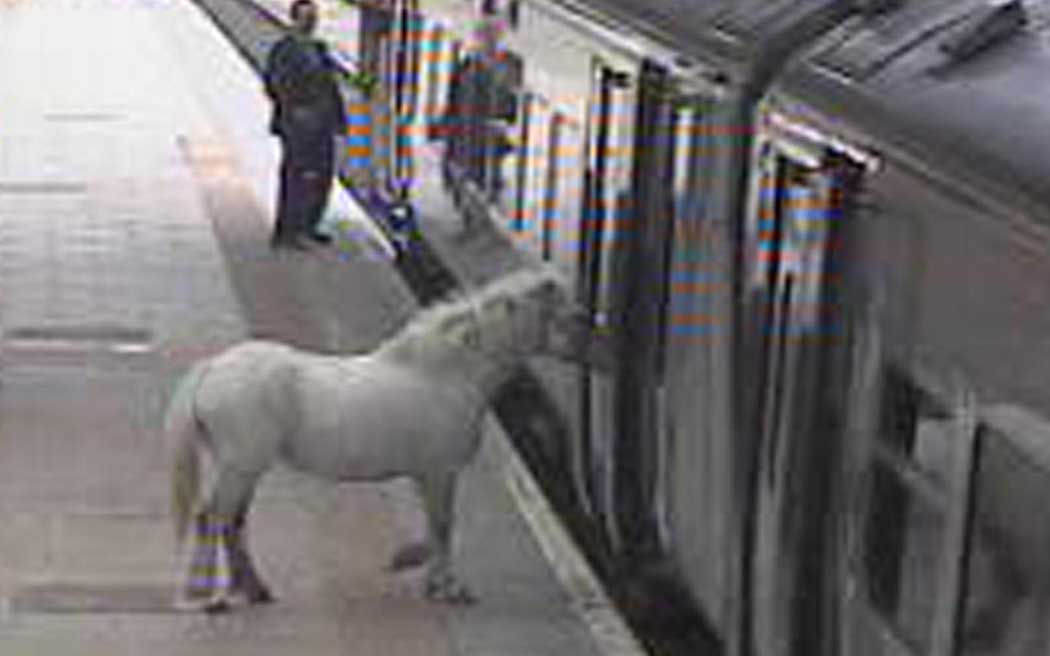 A MAN has been captured on CCTV bizarrely attempting to board a train with a PONY.

The unknown man was unsurprisingly refused two tickets for himself and his four-legged companion at Wrexham General train station on Saturday.

He was caught trying to board the train at Welsh station with the white pony in tow as shocked staff looked on.

Extraordinary pictures show the pony pictured in a lift at the station, walking along the platform and the counter of the ticket office.

Katrina Tzannis, a spokeswoman for Arriva Trains Wales, said “Horses and ponies, which may pose a risk to the general public are not permitted to travel.

“I think he believed he had a right to catch the train because he turned up with the animal and queried the refusal to board at the ticket office.

“I think staff at the station were very surprised and also very confused.

“We’re used to having guide dogs and other small pets but I’ve never heard of anything of this magnitude turning up at our stations.

“I have no idea who he is or where he was going to but it was certainly very unusual.”

After a conductor refused him entry, the man returned to the ticket booth where he tried to buy two tickets – for himself and the animal.

The pony is caught on CCTV waiting behind the man as he tries to buy the fares to travel on Saturday’s 1902 BST service to Holyhead on Anglesey – a two hour journey.

“All animals, except dogs, must be conveyed within a fully enclosed basket or pet carrier with dimensions not exceeding 85 x 60 x 60cm.”

She said the man later left the station with the animal, adding: “I’m not aware that anything like this has happened before.”

A spokesperson for the RSPCA,said: “This is something we might well look into because this is clearly not the way horses or ponies should be transported.

“There’s a lot of hustle and bustle on passenger trains which could prove stressful for the animal or cause injury.

“Even an injury like a broken leg can be fatal for a pony.

“Horses and ponies should be transported in horse boxes so they do not get injured.”