WITH the current hot weather and heavy rain making weeds a talking point for any homeowner – spare a thought for this pensioner who is having to deal with gigantic 14FT knotweed engulfing his house and back garden.

Frail Joe Halford is at loggerheads with his local authority since the enormous weeds made his garden look more like a jungle.

And the arthritis-riddled pensioner claims the council have ordered him to personally remove the ‘frightening’ weeds himself.

Mr Halford, from Dudley, West Midlands, says a Dudley Council official originally told him the Japanese knotweed at the bungalow he moved into three weeks ago would be cleared by the environmental department.

But now, he claims they told him he must get rid of the notoriously tough weeds himself – a job he can’t do because he suffers from osteoarthritis. 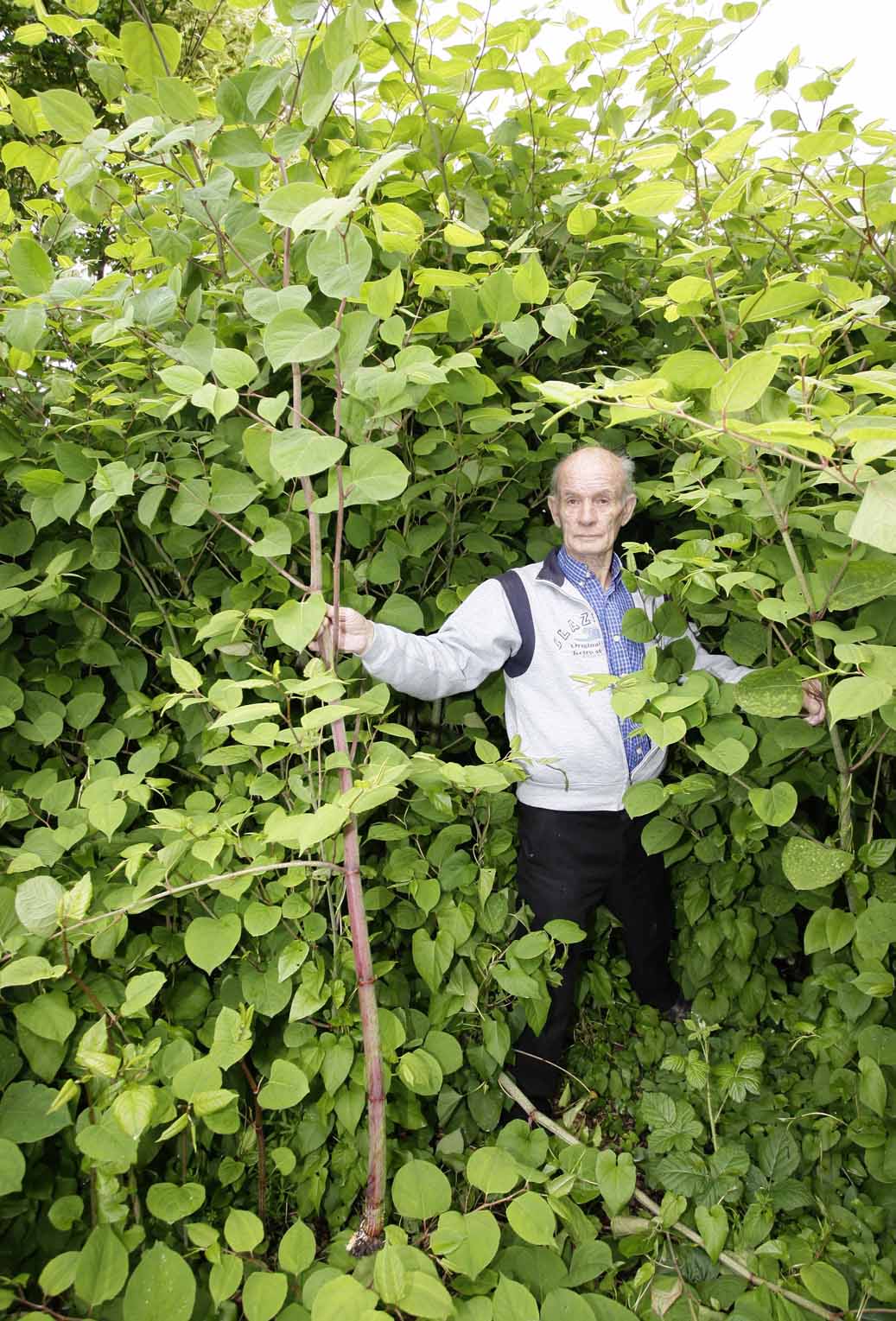 “Six blokes couldn’t do this job in a fortnight so it’s unbelievable to think that a 72-year-old man with osteoarthritis in his knees could do it,” said Mr Halford, a retired road surface layer.

“It’s all over the garden and almost coming into my bedroom window. It’s huge, you really have to see it to believe it.”

Joe says that when he was shown round the one-bedroom council bungalow in Dudley before moving from his old council flat, the garden gate was locked so he could not see the state of the back of the property.

And when he moved in he was shocked to see that the fast-growing knotweed had invaded the garden, dwarfing his own 5ft 6in frame.

“There were shutters down at the back and sheeting over the windows and I couldn’t see anything,” he said. “The lady who showed me round said I had a bit of knotweed but the council were dealing with it.

“When I got here and saw it I was amazed. I had some council men round a few days after to remove some rubbish and they got a phone call from the council telling them they weren’t allowed to work around the weed.

“I’ve been told it’s up to the tennant to deal with this, which is of course me. I dread to think how much it would cost. I wrote to my MP and they told her the same thing.

“It can either be removed fully, which involves digging down four or five metres into my garden, or dealt with using special injections. The injections would take five years to work.

“Either way it’s going to take a huge amount of work and time to sort out and it’ll disrupt my life massively.”

In the UK it is an offence under section 14(2) of the Wildlife and Countryside act 1981 to “plant or otherwise cause to grow in the wild” any plant listed in the Act, which includes Japanese knotweed, due to it’s ability to undermine the foundations of buildings.

Over GBP150 million is spent every year across the country to control the plant, leading the government to launch a trial of Japanese insects that kill the plant last year.

The weed cannot be destroyed without costly work to eradicate all the plant’s mass of roots.

“I’ve chopped it down on my patio with a shovel but it’s growing back already,” Joe said.

“I moved into this bungalow because I could no longer climb steps up to my flat and I was looking forward to having a garden.

“I wanted to have my own lawn, I had loads of plans for vegetable patches which would have required just a little work and would have helped keep me moving.

“In my old flat all I saw was sky and I was so excited about having my own garden to look after.

“But now I just feel like crying, I have no idea what’s going to happen now.”

Dudley Council today said they had been in contact with Mr Halford about clearing the knotweed but the treatment of it took time.

Spokeswoman Louise Kavanagh said: “”As discussed with the tenant the council will monitor and treat the Japanese Knot Weed in his garden.

“As it is currently in the growing stage, it cannot be treated at the moment as it would not be effective but it will be treated by our experts in specific stages of growth every six months.”