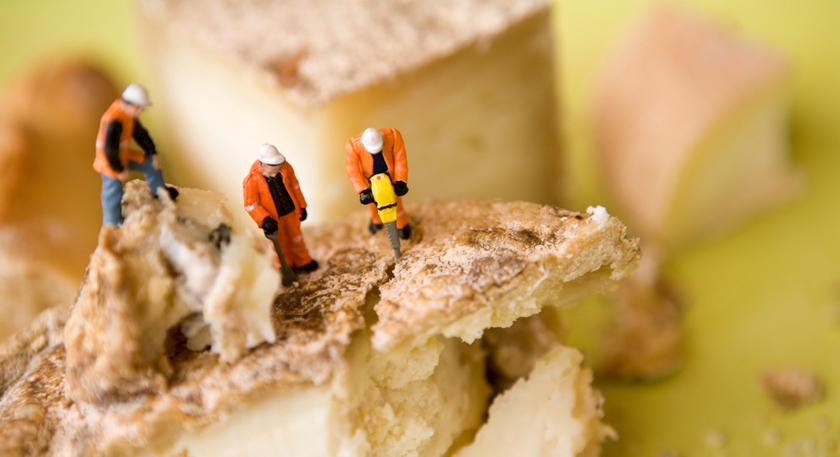 For a more detailed inspection of these urban landscapes reveals a fascinating hidden world in miniature.

Quirky French photographer Vincent Bousserez, 37, from Paris, travelled the streets of Strasbourg with his army of mini plastic people, photographing them in some very unusual places.

For his latest series, he decided to produce a series of diptychs – double images – showing his miniature people sheltering amongst the weeds next to a wide-angle shot featuring some of the city’s most famous landmarks.

The result, called ‘Return of the Weeds’, is a humorous collection of scenes, including the little people struggling to climb stone staircases, using flowers as sunbeds and sharing illicit kisses under the cover of a petunia.

Vincent, who was commissioned  by the city of Strasbourg to help publicise its decision to stop using herbicides on its streets, created the images over a seven-month period.

He visited the city at weekends and cycled around, stopping to set up a shot when he spotted a potential scene.

Vincent, who has around 200 mini figurines, said: “I  was riding a bike all the time, looking for good points of view where there was nice light.

“I would be riding with my backpack and my little characters, plus my camera equipment.

“I don’t use flash or special lighting, apart from a torch.”

Using a Canon 5D Mark II, Vincent photographs the characters, which he buys from a model shop in Paris, after he has put them in position.

Vincent, whose previous sets of photos became an internet phenomenon, allowing him to quit his job in advertising and concentrate on photography full time, says that he believes the popularity of his work is down to its humorous element.

He said: “I like the fact that it is quite fast and spontaneous. I like being in contemporary art but not being into really deep concepts.

“I prefer to be spontaneous, to work with a sense of humour and do it quite quickly, all the time riding around on my bike.”

The photographer said he thinks people find his work engaging because he enjoys creating it so much himself.

He said: “When I make the pictures I feel great, I’m playing like a child.

“I’m in a street, on my bike, riding until I see a nice scene, and then I’ll stop and play with my characters, and then I’ll lie down on the floor while I take the photos, getting different angles.

“All the time I’ll be laughing to myself and everyone is watching me.

“Even if it’s wet or raining I’ll lie on the floor to get my shot, then after it is over I’ll rush home to work on it.

“I’m just like a child living from my passion.

“I talk to other artists and creative people all the time, and they’re involved in deep concepts.

“Just the other day, one of them said to me ‘I’m suffering when I create my art’, and I thought ‘not me’.

“That’s why I’m smiling all the time, I know how lucky I am.”