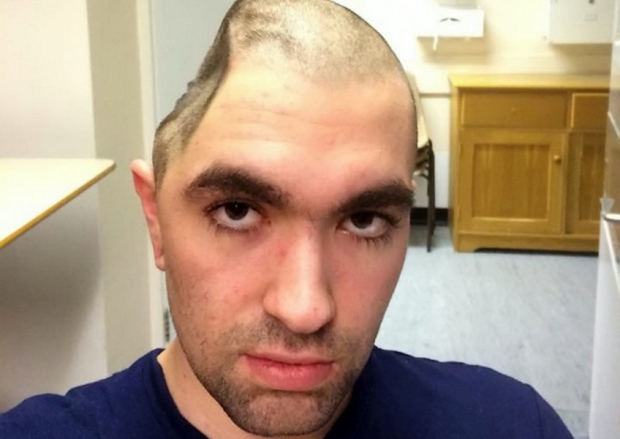 A young runner who suffered a stroke on a half marathon and had to have part of his skull removed is preparing to compete again after a brave recovery.

Student Alex Valentine, 21, collapsed at the tenth mile of the Leeds Half Marathon in May last year when the left side of his body suddenly malfunctioned.

He was rushed to hospital where surgeons removed part of his skull to stop the swelling crushing his brain, leaving a dent in the side of his head.

For a while Alex – who had been previously fit – was unable to talk or use the bathroom on his own.

He still uses a wheelchair but can now walk with the help of leg-splints and a walking stick although he tires quickly.

But almost a year later, he has started exercising again and hopes to run once more, possibly with a para-athletics league.

Alex, from Sherborne, Dorset said: “Having a stroke makes me more determined to go back to running.

“I want to get back into fitness. Every day I exercise now, I spend a lot of time cross training and rowing but the aim is to get back to running.

“I’m not afraid to run again, I don’t think the chances of having another stroke are very high.”

Alex, who was studying at the University of Leeds, told student newspaper The Tab, he said: “I remember very little about what happened.

“I felt a little dizzy for the first ten miles but I just put it down to fatigue and kept going.

“Then half of my body stopped getting a signal from my brain and I hit the tarmac, it was really confusing.”

Alex said before the stroke he could easily run 20 miles a week – but has since needed to learn how to walk again.

He spent six months at a neurological assessment centre at Poole Hospital in Dorset where he wore a helmet to protect the exposed part of his skull..

He had to watch from the sidelines as his friends from university partied and went to festivals while he was in rehabilitation.

He said: “I spent summer 2015 watching Glasto on the TV, trying not to think that I should have been there.

“Everyone returned to university, and I avoided Facebook so I didn’t get upset about what I was missing out on.”

Last November Alex was moved to Queen Elizabeth’s Foundation for Disabled People in Surrey and hopes he will regain enough strength to return to university in September.

The electronics student plans to focus his studies on building technology to help rehabilitate other sufferers.

He added: “In the future, I have plans to start a business designing and rapid-building bespoke personalised tools to help injured and disabled professionals succeed in their professional environment.

“To be honest, every morning of my life I am able to get up and wash without the assistance of a carer I will be truly thankful for.

“I really learnt that there were so much I was taking for granted before, simple things such as being able to shower yourself, go to the toilet or cook your own meals.

“I had just started my first year of university and had a taste of independence.

“This whole experience has been so frustrating but also incredibly enriching. It’s been quite rewarding in a way.”