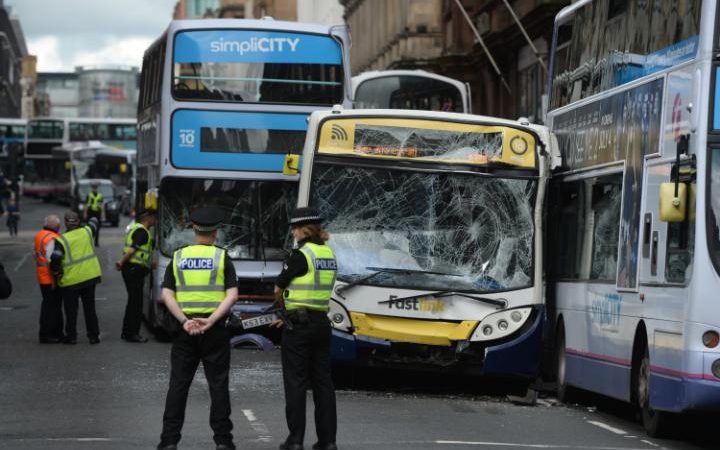 A major catastrophe was averted after a runaway bus rolled 100m downhill on one of Glasgow’s busiest streets when the driver got off to buy a drink.

The driver was stood in a shop next to a bus stop when his double decker rolled off without him after the hand brake was apparently left off.

The driverless bus travelled through a set of traffic lights before hitting a car and carrying on down the hill.

The runaway bus was only halted after it collided with three buses waiting at the next set of lights on Glasgow’s Renfield Street, 100 metres away.

The brunt of the impact was borne by a single-decker bus waiting to turn right,.

Eyewitnesses said that if the other buses had not blocked the path of the runaway double-decker, a major disaster could have happened as the bus would have careered across open traffic at the corner of Renfield Street and St Vincent Street, one of Glasgow’s busiest intersections.

The incident happened yesterday (Mon) afternoon at around 3.45pm.

Three people were taken to hospital but their injuries are not thought to be serious.

The double-decker was parked outside the RF News shop when it rolled off.

It went through the traffic lights at Renfield Steet’s junction with West George Street before travelling downhill to hit the Stagecoach bus.

Ali Hafiz, who was manning the till at RF News, said the bus driver came into his shop to buy a drink – only to turn round and see his vehicle rolling away without him.

He said: “He was in my shop for a good two minutes before he realised he’d left the handbrake off.

“He had already been in Greggs, like a lot of bus drivers do when they stop here.

“He rushed out as soon as he realised his bus was moving slowly down the hill but still crashed into the Stagecoach bus.”

The bus involved was a First Bus 60 which goes from the city centre to Easterhouse and Parkhead.

The Stagecoach bus was an X19 service, which travels from the city to the Queen Elizabeth University Hospital.

The First bus was left with a smashed windscreen and serious damage to its front and door area.

The car, a blue Renault Twingo, was completely crumpled at the back and its rear windscreen smashed in the crash.

Witness Mohammad Sultan, 36, who runs the Charcoals takeaway on Renfield Street, said: “I was looking after the customers when I heard a big blast. People were scared. It was like a bomb.

“I felt my windows shaking – that is how strong the blast was. I looked out of the windows and saw the buses had crashed into each other. It was four buses.

“I don’t think anyone was seriously injured. I think one bus driver injured his head and he was bleeding from his hand.

Another eyewitness, Arran Watkins, posted pictures of the incident on his Facebook page.

In a post, he claimed the driver had left the handbrake off while going into a shop.

He said: “The bus driver went into the shop and left the hand brake off and collided with the blue car with then hit a young boy and then veered down the street and hit two other buses with passengers on it.”

Other eyewitnesses have said there did not appear to be anyone in the cab of the runaway bus.

The road was closed while police attended the scene.

The Greater Glasgow Police Twitter account posted an update which said: “Police Scotland has received a report of a bus having struck a male on Renfield St. Emergency services at the scene, enquiries are ongoing.”