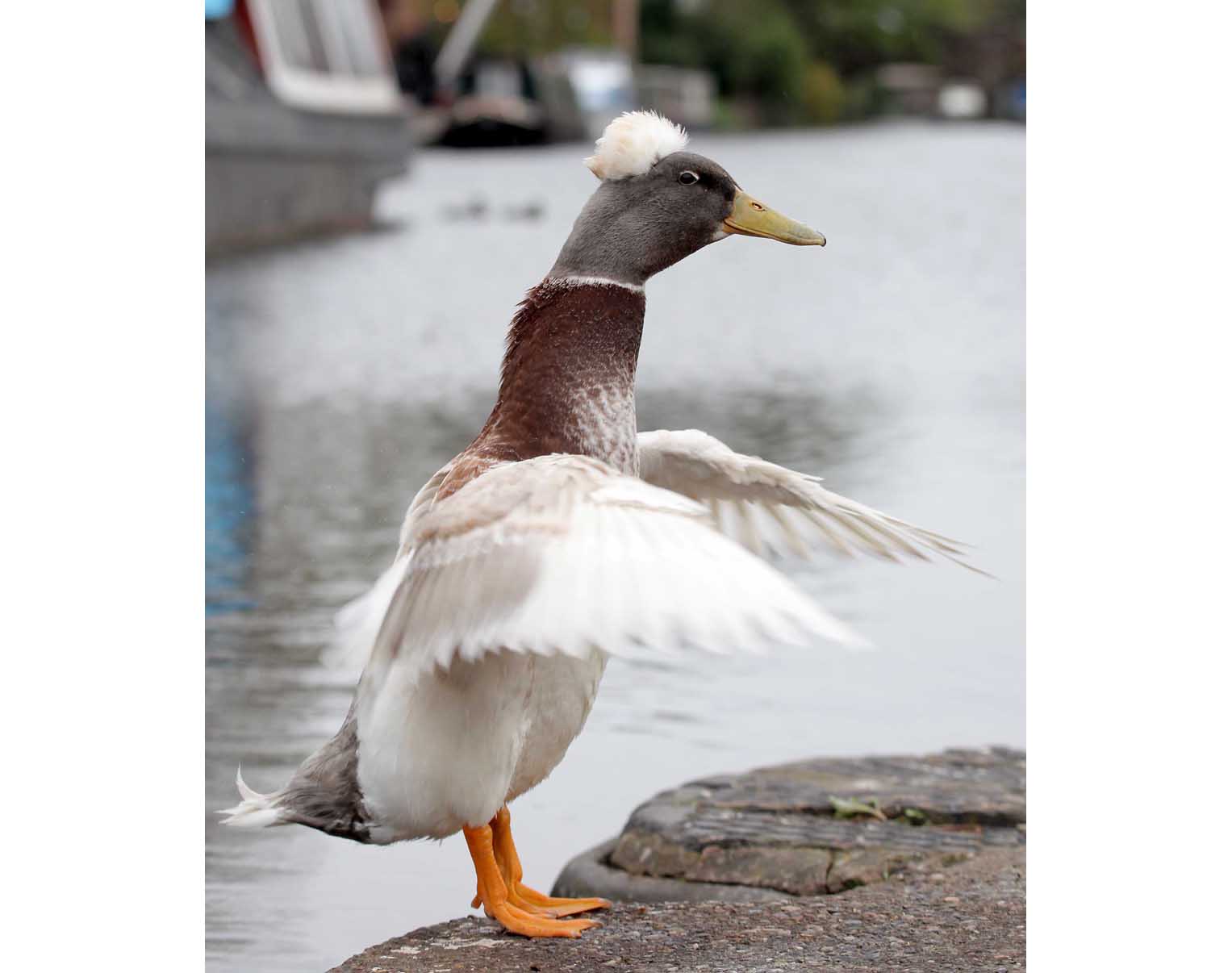 A BIZARRE looking duck has been scaring off other birds on his canal – because he sports a punk rock Mohican.

Bearing resemblance’s to the likes of Johnny Rotten and Billy Idol – the ‘Punk Duck’ of the Worcestershire canal has been living a somewhat rock ‘n roll lifestyle on his waters by strutting around terrorising the local birdlife.

His unique-looks and rowdy behaviour have made him a bit of an outcast among his fellow birds on the York Street Lock, in Stourport, where he resides, say locals.

But despite his anarchic ways – he has proved more popular with residents in Stourport, Worcs, with people flocking to see the rock ‘n’ roll duck with his Mick Jagger style swagger.

He was snapped by a stunned Pamela Amos, outside her home in Stourport, Worcs.

“It was extraordinary to see it,” she said. “We saw it outside our home, we had no idea what it was and we didn’t think it was a duck. He looks much bigger than all the other ducks who live on the canal.

“The others around didn’t like it either, I think they’re all jealous of his plumage.”

With the school holidays the duck has become something of a tourist attraction for locals.

“People bring their children to see him every day,” said Pam. ‘They’ve never seen anything like it, I think he likes the attention, we feel quite privileged to have him here.”

Another local Michael Brydon, 39, added: “He acts like a bit of a punk – he scares off the female ducks because he doesn’t quite fit in. He chases them everywhere.

“He acts a bit rock ‘n’ roll strutting around without a care in the world. He doesn’t care if he isn’t liked – just like a true punk.”

According to Fenella Jerry, a spokesperson for the RSPB, the rare duck is in fact a hybrid of the common Mallard, bred for captivity, and rarely seen in the wild.

“[The feathers are] not a growth as far as we can see,” she said. “But rather a clump of feathers. It is known as a silver-crested duck – a domestic variety of duck that has been bred from the wild mallard ancestor. ”

The ducks are not commonly found outside of private collections, however some have escaped over the years and have adapted happily to life in the wild.

“Now and again we get people asking about them when one or a pair decide to go feral and turn up at a pond in the local park,” added Fenella. “So although they are not common, it is not completely unheard of.”

“They are rare in domestic situations however, so it certainly is unusual and one of those freak things.”