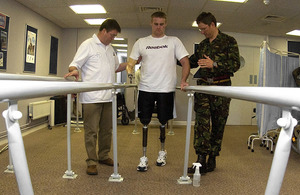 War veterans are set to benefit from an £11 million boost in funding for the NHS.

On Friday (February 15th), the government announced plans to improve care for those who have been injured in conflicts and providing access to a high level of prosthetics and rehabilitation services.

Nine NHS facilities throughout the UK will receive a share of the fund, with up to £6.7 million available for individual institutions.

Commenting on the scheme, health minister Dr Dan Poulter stated the government’s aim to provide veterans with the “very best” in specialist centres across the country.

“Ex-servicemen and women who have been injured in the line of duty deserve the very best possible care from the NHS,” he said.

“This is why we are making more funding available to improve veterans’ prosthetic limb services – and £22 million in total between 2010 and 2015 to support veterans’ physical and mental health.”

The announcement follows a series of recommendations laid out by Dr Andrew Murrison MP, the Ministry of Defence’s minister for international security strategy in a report on the provision of prosthetics for military amputees.

He suggested instituting a handful of specialist multi-disciplinary centres in England to provide a similar level of care to that offered by the armed forces.