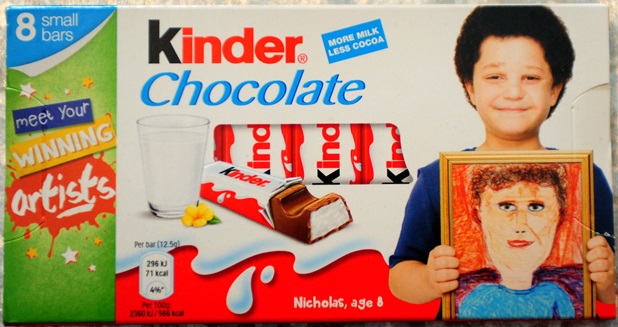 A youngster who suffered self-esteem issues because of a rare birthmark has fought back to become the face – of his favourite CHOCOLATE bar.

Nicholas Nikiforou, nine, was born with the rare congenital melanocystic nevus – a collection of moles on the face which affects one in 500,000 people.

Doctors said there was a possibility that the roots of the moles could have damaged his nerves and he would not be able to see.

Thanks to a complex procedure most of the birthmark was removed at Great Ormond Street – but Nicholas was left with facial scars that added to his insecurities.

But he has now beaten hundreds of other children across the country in a competition to draw a self-portrait for one of the UK’s most popular choccy bars.

The budding artist will now have his picture on Kinder Chocolate wrapping.

He said: "I am very happy. The best bit of it was the painting. I really enjoyed it."

Nicholas, from Weston-super-Mare, Somerset, got stuck into competition, encouraged by his school, Locking Primary School.

His mother Melanie, 46, said: "I am so pleased he has been picked. Art is something he has always done.

"He would do it when he had been in hospital and needed some time off. Kinder said it was his creativity, good use of colour and personality that stood out.

"I am really happy that it says he is from Weston on the pack as well because everything about the area and Somerset he loves and inspires his art.

"He loves nature and trains and all of that is here for him.

"Locking Primary School has been fundamental in Nicholas’s confidence, self-esteem, and [helping him] overcoming certain anxieties.

"They have given him a platform to exceed in all aspects of his being and what he does.
He has had an amazing journey and I was really happy to see that.

"Children can achieve anything they want, regardless of what they look like."