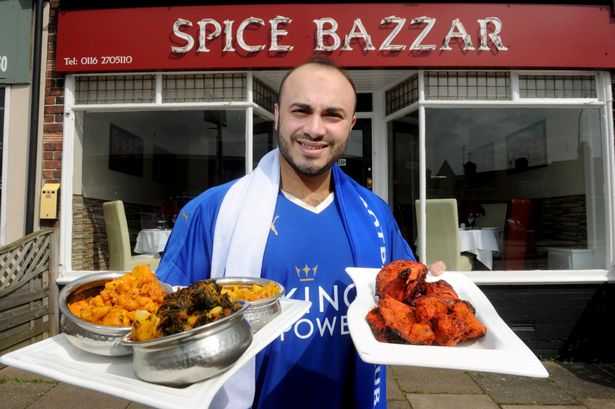 Spice Bazar will serve up a choice of madras, masala, jalfrezi or bhuna to season ticket holders for free on May 15 if the Foxes are crowned champions.

Abdul Giash, who owns the curry house in Welford Road, Leicester, expects it will “cost thousands” but says he doesn’t mind because it’s a “once in a lifetime experience”.

He added: “The reason why we are doing this is because everyone in the restaurant follows Leicester City and we thought ‘why not do this?’

“You only experience this sort of thing once in a lifetime. I want them to do it continuously but winning the title this season would make the city so proud.

“We want to be a part of the celebration, thank the home and away supporters and to encourage them to back Leicester to win the league.

“I know it’s going to cost us thousands but it doesn’t bother us because we are not going to do it every time and we hope that by doing this people recognise us.

“I never expected Leicester to do this. I expected them to get to 40 points and then sit comfortably in mid-table but this is just unbelievable. The supporters who come in here can’t believe it either.”

The restaurant are also taking part in the city’s ‘Backing the Blues’ campaign by putting up blue LED lights on Friday April 29 – two days before the Foxes’ match with Manchester United.

* Leonardo Ulloa scored a controversial injury-time penalty as Leicester City battled back from behind to draw 2-2 with West Ham United on Sunday (17/4).

The Foxes’ hero Jamie Vardy was sent off in the second half after referee Jonathan Moss gave him a second yellow card for diving in the box.

Leicester are now eight points clear of Tottenham, who have a game in hand, at the top of the Premier League with just four games left to play.