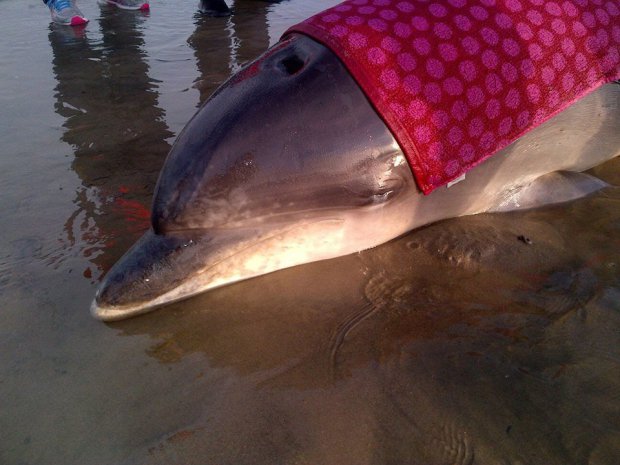 These touching pictures show a dolphin wrapped in towels after volunteers rescued it from a beach where it was stranded.

A tourist spotted the distressed bottlenose dolphin while she was driving along the coast before calling animal rescue services.

The female animal was found blistered and sunburned by volunteers from the Scottish SPCA and British Divers Marine Life Rescue (BDMLR) on Sunday evening.

They were able to release the dolphin back into the water near Nigg, on the coast of the Cromarty Firth, once the tide came in.

The dolphin is a member of the resident pod in the Moray Firth and has been named Spirtle by local volunteers.

And Simon Wharton, animal rescue officer at the Scottish SPCA, has since praised the efforts of all those involved in the rescue.

He said: “We were alerted to a bottlenose dolphin that became stranded on the beach at Nigg Bay at the weekend.

“We’re not sure how it came to be stranded but it could be that it came in to the bay to feed and got caught out by the changing tides.

“The tide had already gone out so we laid wet towels on top of the dolphin and stayed with it until the tide came back in around ten hours later.

“It was such a relief to get the dolphin back in to the water safely thanks to a tremendous team effort from British Divers Marine Life Rescue and the locals involved.”

Colin McFadyen, the north-east region coordinator for the BDMLR, said: “The dolphin was very weak by the time we found her and we had to wait on the tide coming in.

“The towels were placed over her as a matter of course to keep her moist and avoid her skin drying out.

“Her skin had been blistered by the sun and while this was cause for concern for the vets at first, they said it was something which would heal.

“She was still weak when we managed to get her back in the water but thankfully she was able to swim away by herself.

“She is part of the Moray pod so the other dolphins will help her in her recovery.

“We have been keeping an eye out for her but she hasn’t been seen since the rescue.”