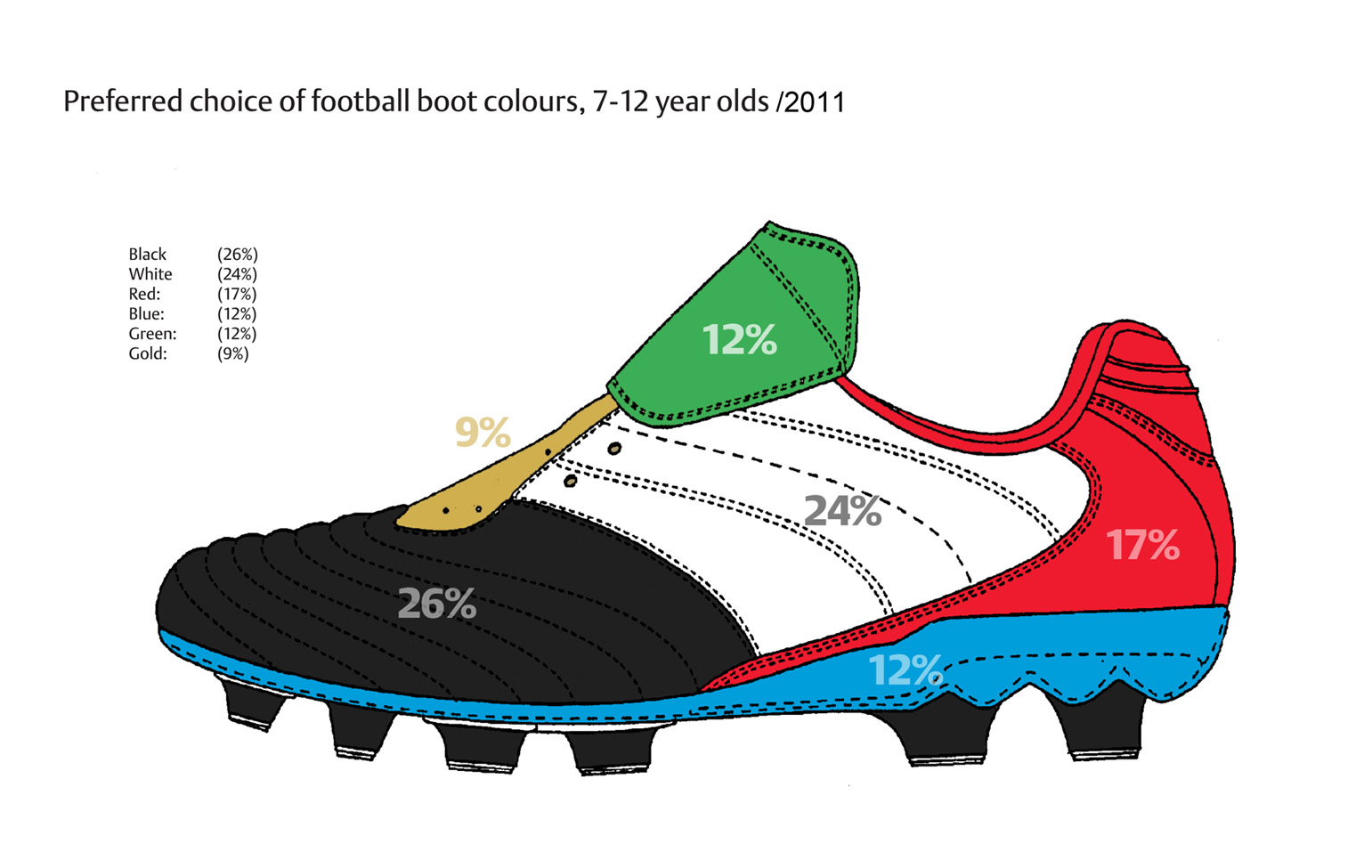 TRADITIONAL black football boots are in danger of dying out – after it was revealed most youngsters buy coloured boots to emulate their idols like Lionel Messi and Wayne Rooney.

Flashy red, yellow, blue and white footwear worn by some of the world’s biggest names in football is replacing the black boot synonymous with the British game for over a century.

Now a leading academic is claiming this could signal the demise of the black football boot from the ‘Beautiful Game’ forever.

In a national survey of 7-12 year old’s, a staggering 74 per per cent revealed they wore non-black boots to play football in.

White proved to be the most popular non-black colour taking 24 per cent of the vote, followed by red with 17 per cent, blue and green both with 12 per cent and gold with nine per cent.

This compares to 100 per cent of the same age group in 1996 who said in a follow up survey that they wore black football boots.

“There’s every chance that we could be witnessing the death of the black football boot.

“If children wear black football boots these days they get sneered at – it’s nothing vicious but you’re probably letting yourself in for some mild abuse.”

Professor Cashmore added that the changes to the game over the last 17 years has been more drastic than the last 100 years of the sport.

He added: “Football is now all about entertainment. And as part of entertainment, you need a product to sell and football boots are part of this product.

“This is why the likes of Nike and Adidas are changing designs so much and constantly adapting to appeal to consumers.

“People see their favourite player wearing them and rush off to the shops to buy them. David Beckham possibly started this on a major scale after changing to white boots.

“But every time they bring a new boot they have to make it even more distinguishable so we’ll possibly see the back boot slip out of existence.

“You used to be able to buy a pair of football boots and wear them until you grow out of them – but this isn’t the case anymore.”

The controversy surrounding coloured boots is something which has been debated across the sport for many years – with Sir Alex Ferguson even banning the Manchester United youth team from wearing anything black boots when playing for the club.

And in 2009 Aresnal’s Nicklas Bendtner caused a stir by sporting a pair of pink Nike boots.

A spokesperson said: “It’s clear that coloured boots are here to stay. All you have to do is go to a supermarket or sports store and you can see coloured boots everywhere.

“Some would say that the likes of gold boots should be reserved for the likes of top goalscorers or captains of teams – but now it just seems its who can produce the loudest and the most flamboyant.

“It’s been a transitional development over the years.”