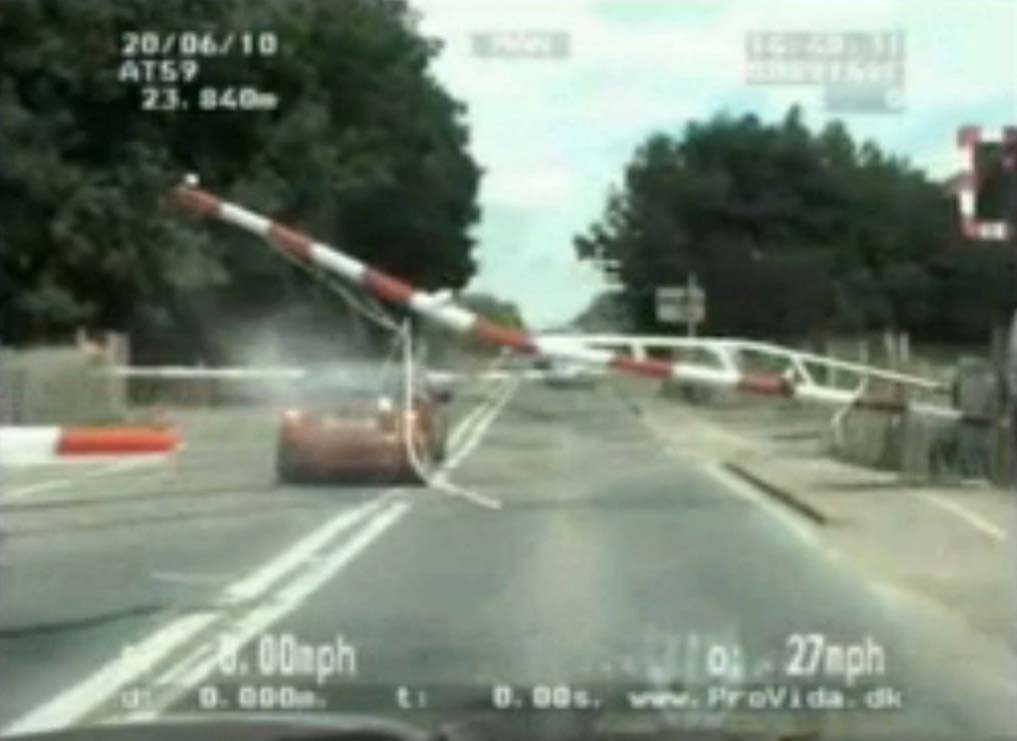 THIS is the dramatic moment a car smashes its way through a level-crossing with its driver narrowly avoiding instant death as a train thunders by seconds later.

Terence Fowler lead police on a high 90mph chase before ploughing his car through the barriers of the crossing with a 120-tonne passenger train approaching.

Police can be heard saying ‘oh s**t* as Fowler crashes his way through the barriers – leaving them strewn across the carriageway.

Dramatic on-board CCTV captures the two perusing officers say ‘he’s done the crossing’ before declaring ‘there’s now way on earth we were going through that’.

One officer can be hear saying ‘Christ’ as the train passes by at high speed a matter of seconds later.

Fowler, 20, had stolen a red Mercedes C180 from outside a home in March, Cambridgeshire, on the morning of June 20, last year.

The stolen car triggered an Automatic Number Plate Recognition (ANPR) camera in and officers tried to stop him on a bridge.

But Fowler, of March, refused to pull over and a pursuit ensued through Stanground to Whittlesey, Cambridgeshire, at speeds of more than 90 miles per hour.

During the pursuit, Fowler drove on the wrong side of the road, overtook vehicles on roundabouts and knocked off another vehicle’s wing mirror.

Police abandoned the pursuit because it was too dangerous and could only watch as he ploughed through a closed level crossing.

Passengers reported feeling the carriages shudder as the train smashed into the barrier debris moments later.

The vehicle was later found abandoned.

However, forensic tests discovered Fowler’s blood on the smashed windscreen and he
was traced through his DNA.

He was caught after being arrested in Bournemouth for an assault.

Sentencing Fowler Judge Nic Madge said: “It is hard to think of more dangerous driving which did not cause injury.

“You were extremely lucky. You were seconds away from a fatal collision with a train in which many people, including yourself, would have been killed or injured.

“In other words, if you had survived you were seconds away from a sentence of life imprisonment.

“I do not sentence you for what might have happened but for what you actually did. But I bear in mind it was a frightening experience for the train driver who saw the car flash across the level crossing moments in front of his train.”

At the hearing yesterday, Craig McDougall read the train driver’s statement. He said hitting debris on the line was “frightening” because the driver could do nothing.

He slammed on the brakes, but it takes about 700 metres to stop a 120-tonne train and so it passed through the crossing.

And the statement from the signalman was also read out. He said he could see the barriers on the line. He added: “The first thing that went through my mind was: ‘The train is going to derail and there is nothing I can do’. I was genuinely frightened for myself and the train.”

It cost GBP29,852.50 to repair the barriers and caused 476 minutes delay to trains in the Peterborough area, costing the train company GBP5,231.55.

Fowler pleaded guilty to dangerous driving, aggravated vehicle taking, criminal damage and obstructing an engine, but only after he heard “overwhelming” evidence against him.

In mitigation, his defence lawyer Caroline Allison told the court he fully understood the danger he had put everyone in.

She added: “I do not wish to detract from what is clearly a prolonged and very dangerous piece of driving.

“He does appreciate how scared people were and how serious these offences are.”

Detective Inspector Michael Branston, of Cambridgeshire Police, said after the hearing: “Fowler showed total disregard for other road users, pedestrians and rail passengers as he tried to evade being caught by police.

“His actions put many lives at risk and he was lucky not to have been killed himself.

“This case shows that no matter what lengths criminals will go to, justice will always catch up with them in the end.”?