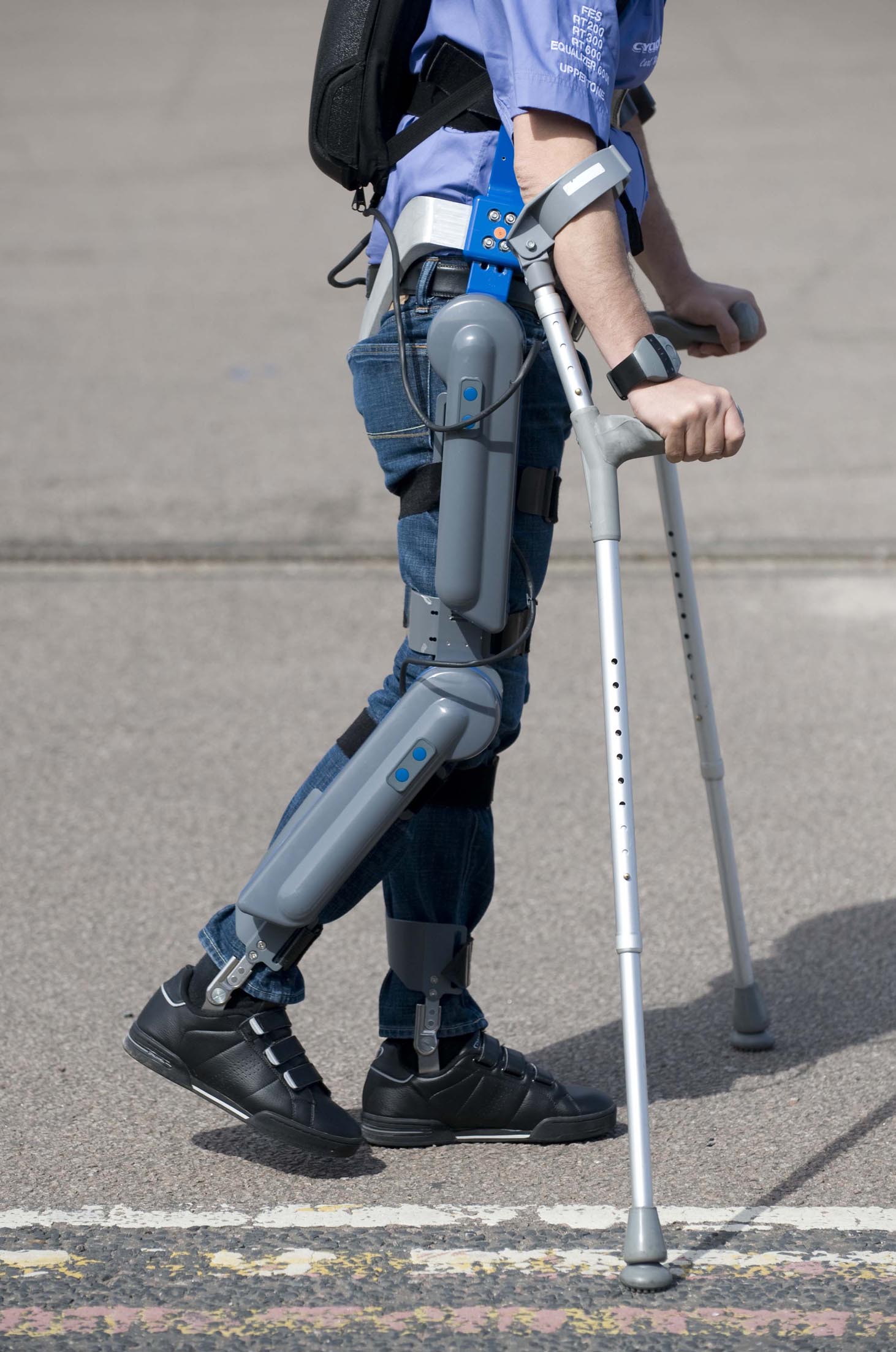 AN ISRAELI-designed revolutionary exoskeleton that allows paraplegics to stand and walk up stairs has been unveiled in the UK as an ideal device for injured British soldiers returning home from war-torn countries.

Makers say the first-of-its-kind Robo-cop style suit will give people who thought they would never walk again the miracle of taking their first steps all over again.

The pioneering bionic device, acts as an exoskeleton for the user with computerised motors helping keep the machine upright, allowing them to climb stairs without the need for others to carry them up.

The complex system will help paraplegic people, including injured soldiers returning from places like Iraq and Afghanistan, to live easier lives at home.

The technology has already been put into use in a specialist spinal injuries unit in Italy, following extensive testing, and a consumer version should be on the way later in the year, allowing people to use the system in their own homes.

It is said to be “totally interactive” and allows the user complete freedom to move that they would not normally have, and complete control over the movement of the exoskeleton.

The UK is one of the first countries to get a look at the concept, as it arrives/arrived at the NEC in Birmingham today/yesterday (WEDS).

Currently users have to be medically assessed and undergo lengthy training before being allowed to use the system, however the company say a future consumer version will be easier to use around the home.

The device is the first of it’s kind to allow those normally trapped in the confines of a wheelchair to stand upright to move around their house, it’s Developers, Northern Israel-based Argo Medical Technologies Ltd, are specialists in the field of rehab devices.

Cyclone Technologies is to introduce the system to the UK. It’s managing director, Dave Hawkins said: “For a paraplegic like myself it means everything.

“It means I can look my kids in the eye stood up, of means I can give my girlfriend a cuddle. It means you can do normal things like going to a gig and standing up to watch.

“We are marketing it towards the military. It would be fantastic for people returning injured from Afghanistan to find they’re not stuck as a paraplegic.

“The future holds many possibilities for people with spinal cord injury; developments in stem cell therapy among them.

“The ReWalk exoskeleton is a light wearable brace support suit with a sophisticated computer system that restores a person’s mobility functions, thus improving both quality of life and physical health.

“Towards the end of this year we shall have a personal model that will be tailored to match an individual’s physical capability, following medical assessment and training in a rehabilitation centre.

“With a sporty look, the personal model will be intended for daily use and as well as offering to people like me the ‘miracle’ of walking, it has the added benefit of reducing stigma that can be associated with wheelchair use.”

According to Mr Hawkins, he has already potential users expressing interest, including the British Armed Forces.

Radi Kaiof is an Israeli who is trained to use the device. He lost the use of his legs while serving in the Israeli army.

“For me it is amazing, the freedom, to be told I can walk after I thought I could never walk again is brilliant,” he said.

“I have been using it for two years now, it has changed my life, I can live normally again.”

Amazingly it only took five two-hour sessions for Radi to be completely trained on the system.

Rather than forcing the user into motion the system gives them complete control of the device. From a wrist watch Radi selects what he wants to do, stand, sit, walk, ascend, and then uses his body movement to control.

After choosing to walk all he needs to do is lean forward and off he goes. Stopping is a simple matter of stopping leaning forward.

There are several medical benefits to using the device. “Being sat down all the time creates loads of problems,” said Mr Hawking.

“It crushes your internal organs, being able to stand means life is much more comfortable.

“Being sat down when you want to stand causes horrible mental anguish as well. It causes depression and suicides have become far too common.

“Just the feeling if standing helps you live immeasurably.”