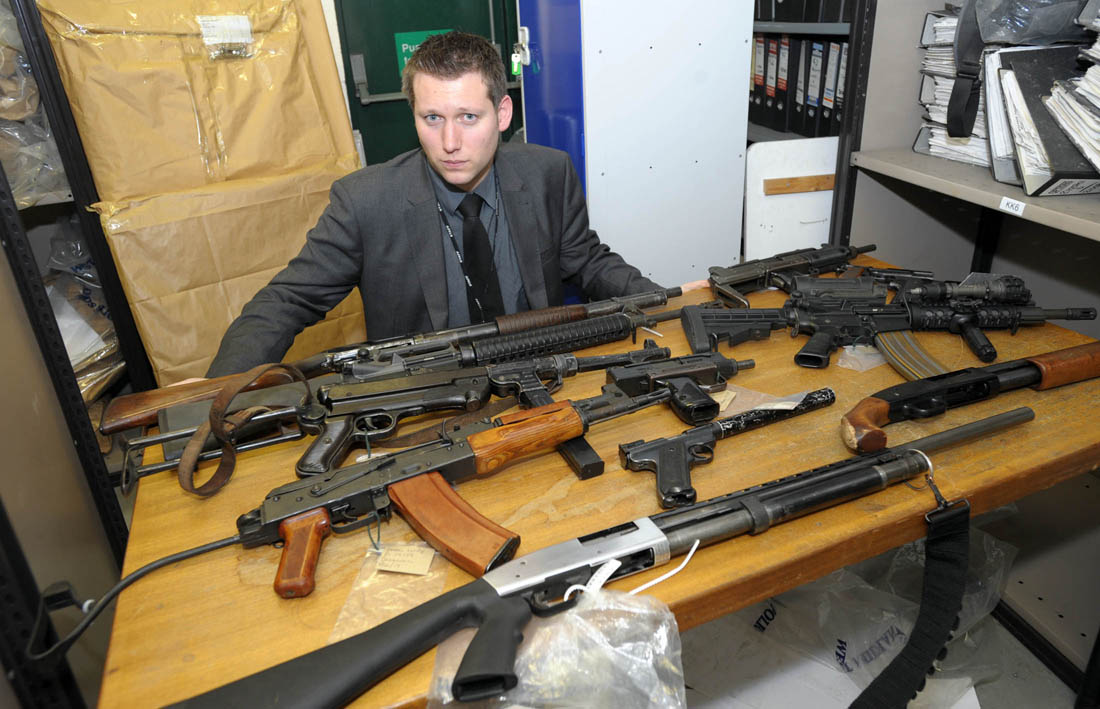 A FRUIT and veg trader who hoarded some of the deadliest weapons ever encountered by a police force was today beginning a 16-year prison sentence.

Gun fanatic David Evans had Uzis and shotguns, some of which were only issued to foreign armies – but he claimed he had only bought replica and rubber guns to use for ‘war games’ in his loft.

Evans had claimed he kitted out mannequins and armed them with imitation guns in order to recreate scenes from Hollywood war movies such as ‘Saving Private Ryan’.

But real American and Israeli military issue machine guns were found alongside a pistol with a “hitman-style” silencer attached.

More than 500 bullets were found, with his collection of deadly ammunition containing bullets designed to explode on impact.

Police who seized the cache of 10 deadly guns initially feared they could have been used by far-right extremists.

They say the guns could have caused mayhem had they fallen into the hands of terrorists or the region’s drugs gangs.

But detectives say 42-year-old Evans, from Wordsley, West Mids, was simply a collector who never had any plans to sell them or use them in crime.

He told Evans, who was convicted of 29 firearms charges: “You cynically and deliberately collected this cache of weapons, some of which were described as as dangerous a weapon as one firearms expert had seen in his 37-year career.”

He said the guns were kept with “little or no security” when Evans had passed the weapons to a “naive” associate, 25-year-old Daniel Thatcher, from Wall Heath, West Mids.

A major investigation is still trying to determine how fruit and veg seller Evans got hold of the collection, although some of the components were bought on ebay.

Police searched Thatcher’s house when he was arrested on an unrelated matter and found a 9mm Uzi and a 9mm pistol and cartridges under his bed.

In interview the 25-year-old mobile mechanic, who had a firearms licence for three legally held guns, refused to say if he fired most of the illegal weapons.

Police found a bullet at a barn Evans ran his business from at Hinksford Farm, Swindon, South Staffs.

Evans, who was arrested on June 17 last year, was convicted by majority verdicts of 10-2 by jurors at Wolverhampton Crown Court yesterday/Wednesday.

Evans was jailed for five years, later cut to three, in 2005 for posting an illegal firearm to a legitimate dealer in Scotland.

Det Insp Gary Dring, who led the investigation, said today: “Because of the nature of the weapons that we recovered, we had to then look at where they got them from.

“Those types of weapons are not seen in this country, they are not seen on the streets and you don’t see gangs using them.

“You do see armed forces using some of those guns.

“So it was particularly unusual to find those guns with members of the public and we were desperately looking to find where they had come from and how they had come into the country.”

Police initially feared a connection to the far right English Defence League, protesting in Dudley near where the brothers were arrested.

Det Insp Dring said: “When you’ve got these people coming out of a building adjacent to the EDL, at first we thought ‘Are they EDL?’

“And when you find the firearms, you have to be thinking this is far more serious.

“Are they part of some organisation?

“But in reality they weren’t. All the inquiries we’ve made to date show quite categorically that they weren’t part of any organisation but a burglar could have gone to those houses and then we’d have an unknown burglar walking around our streets with these sorts of weapons.

“It doesn’t matter that David Evans didn’t want them for a criminal purpose, it’s the fact that somebody else could have got hold of them and then where would we be?”

He said officers were “very fortunate” to recover the guns, and praised the professionalism of those who searched the brothers’ homes.

“His fascination with guns has put everyone in danger, not only himself and his family,” he said.

“This is the sort of stuff that makes national news – none of the people involved in incidents such as Dunblane were the normal criminals, but one day they flipped.”