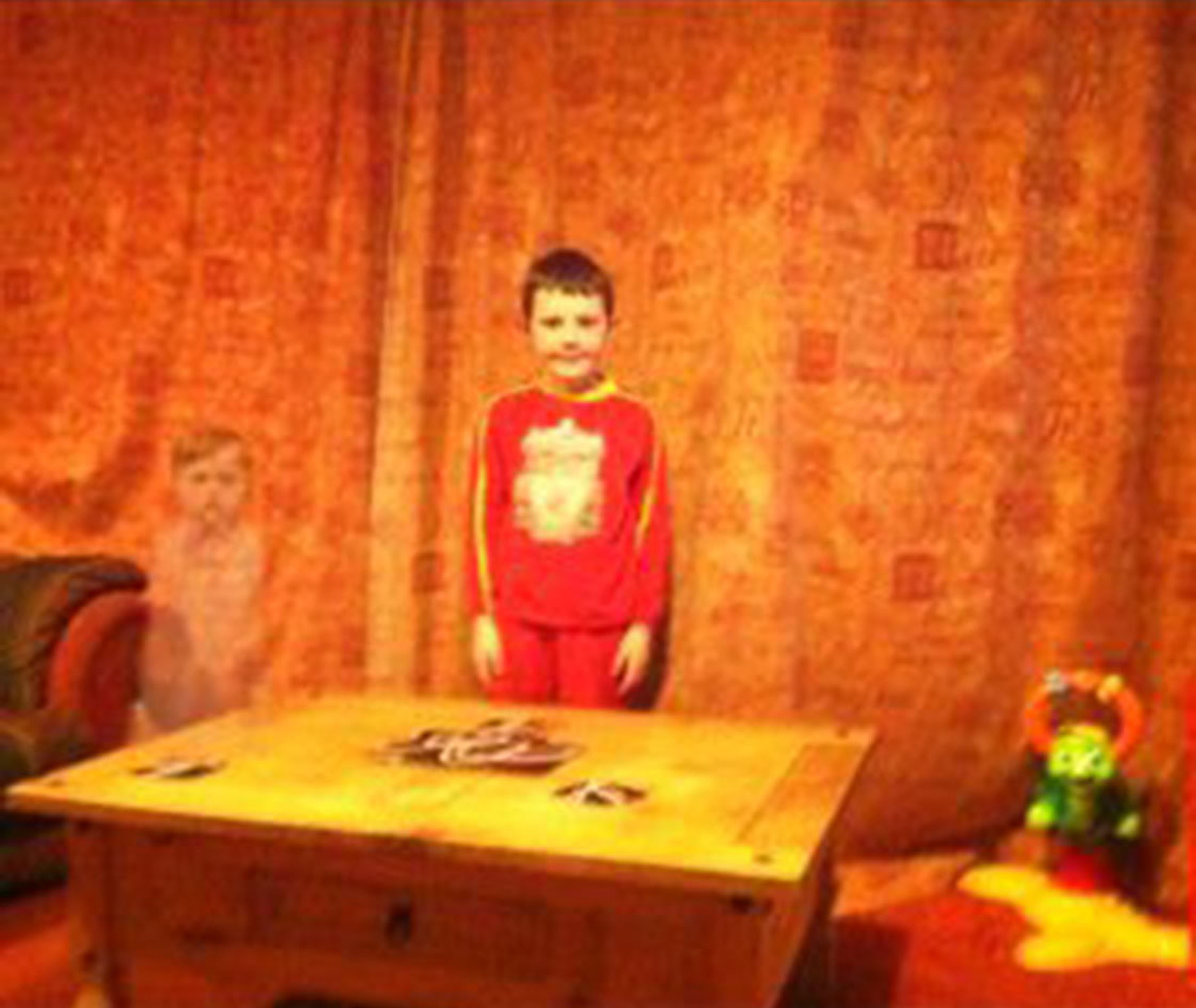 THIS amazing  photo shows the moment when a young boy’s ghostly playmate was caught on camera.

Julie Smith, 52, was amazed when she received the picture of her grandson, Sirus, five, standing next to a childlike, spectral figure.

Snapped by her daughter, Sarah Walsh, the family is convinced that it shows an uninvited house guest who may have been with them for some time.

Julie, from St Weonards, Hereford, says she has no idea who the child is, and was surprised to see a ghost in a relatively new house.

Built in the 50s, her daughter’s house in Redhill, Surrey, is not the sort of ancient structure normally associated with the supernatural.

Julie, said: “My daughter was just taking pictures of her children larking about with her new phone, when she saw that the first photo of her two boys had a halo over both of them.

“She thought ‘this isn’t right’ and deleted it, and it was when she took the next picture that we noticed Sirus’ little playmate.”

“What was quite strange is, she put it on to Facebook, and within an hour it must have had about 20 comments.

“But then it disappeared off the site. Luckily, I’d saved a copy to my computer.

“But when I tried sending it to other people via e-mail, they said that they weren’t receiving it – it never got to them.

The image was also mysteriously wiped from Sarah’s mobile phone.

Julie said that her family were not shaken up by the image, because they believe there has long been a supernatural presence in Sarah’s home.

“We weren’t too alarmed, as we’ve got a friend called Pete, he has what we would call ‘The Gift’.

“When he’s been at our Sarah’s, he’s said before ‘you’ve got lots of them in here, people from the other side in your house’.

“But he reassured us that they’re harmless.”

Pete had even said that he felt the presence of a young, ghostly companion for young Sirus before the picture was taken.

“Pete told us that Sirus has a little playmate, a little girl, this is who we think it could be in the photo – it’s very clear that it is a little person.”

Julie said her grandson wasn’t scared by his new friend, and seems to be used to ghostly goings-on in his home.

She said: “I don’t think it scares him, he never seems to be bothered.”

Her daughter has also reported items being moved, and one instance where she believes that she received mothering support from a ghost.

Julie said: “When he was a baby, his mum was in the kitchen and Sirus was in the living room in a crib.

“He started crying, when she walked in the crib was moving as if someone was rocking it.

“We’ve always said her nan lives with her so it wasn’t such a big surprise.”

Suggestions that the photo are fake have been refuted by Julie, who insists that no-one in her family would have the technical know-how to mock up a forgery.

She said: “We are usually very sceptical, if it had been somebody else’s photo we may have doubted it, but because it’s come from our daughter we believe it.

“She wouldn’t have a clue how to fake one.”

He said: ““If she lived in an old house or if there was a cupboard with a reflection or something fair enough, but she lives in a 1950s house in Redhill – we have no idea who this might be.”