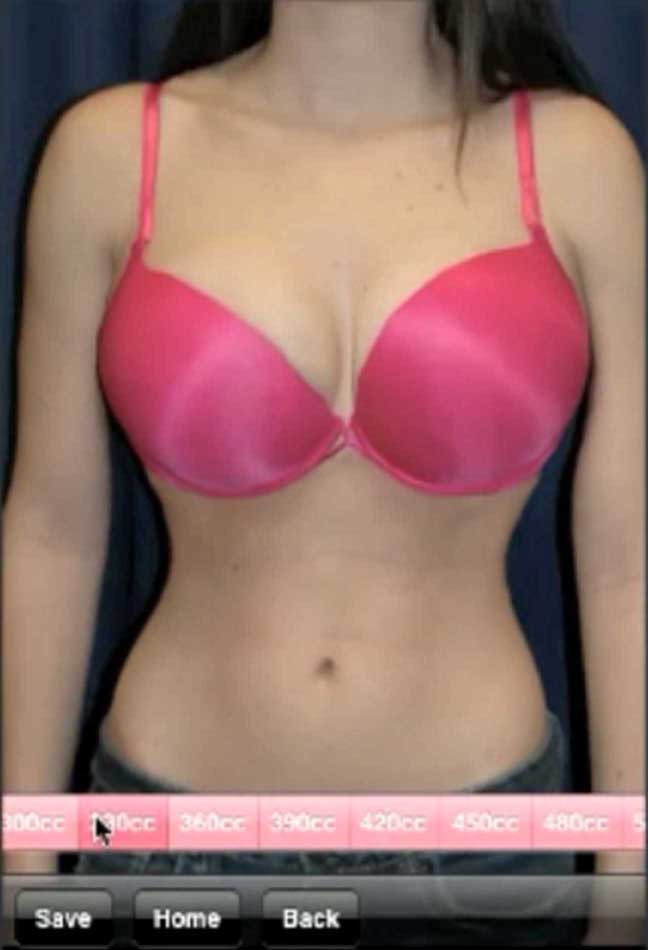 WOMEN who are thinking about going under the knife can now get an instant boob job for free thanks to a new iPhone app.

The app is the brainchild of US plastic surgeon Elizabeth A. Kinsley, from New Orleans, who was the first doctor to employ 3D imaging technology to show women what they will look like after surgery.

Called iAugment, the app allows iPhone users to take a picture of themselves – or their girlfriend – and virtually boost their cup size.

Users start by taking a photo of their chest – the makers of the app say that pictures taken in a bra or bathing suit work best – before using two on screen cursors to mark out the breasts.

They then expand the cursor to cover the boobs, before choosing from 17 different sizes of virtual implant, ranging from 210cc to 690cc.

A single cup size is around 190cc, so the app enables women to see what they will look like with their breasts boosted up to three cup sizes.

But, rather than fork out for the expensive procedure, the app is designed as a “fun first step” for women who are considering going under the knife.

And if women are happy with their results, they can use the app to find their nearest approved plastic surgeon.

Dr. Kinsley said: “Breast augmentation can be a complicated procedure with women asking questions like ‘what will they look like?’ or ‘what size is right for me’.

“This is designed to give them the best idea possible of how they might look after surgery.

“You can show your friends, your boyfriend or your husband and say ‘what do you think?'”

Since it was launched on Apple’s App Store, iAugment has received over 7,000 ratings.

Reviewing the app, one user, Shannelbirmingham, said: “It’s good 2 see what your breast look like enhanced..Also great to fool ppl on the net x” (sic).

Another customer, Kelly Bolton, 27, said: “I’d been thinking of getting a boob job for a while but wondered what it would look like.

“This was a great way to visualise how it would look and which sort of size I could boost by bust-size too.

“I’m definitely considering going through the procedure now and have booked an appointment with a plastic surgeon.”

And men have also been quick to see the potential of the app for slyly boosting their wives and girlfriend’s assets.

Builder Jim Slater, 38, from Birmingham, said: “I think it’s great, we’ve all thought about what our missus would look like if her boobs were a bit bigger, and now you don’t have to fork out loads of money to find out.

“I wouldn’t pay for her to get the real thing done though, I’d never afford that, but a fella can dream, can’t he?”