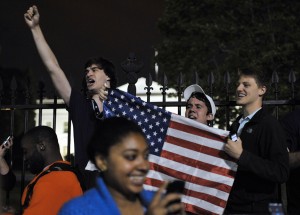 Al Qaeda leader Osama bin Laden was killed in a firefight with US forces in Pakistan on Sunday, President Barack Obama announced, ending a 10-year worldwide hunt for the mastermind of the September 11th attacks.

“Justice has been done,” Mr Obama said in a hastily called, late-night White House speech revealing the death of the head of the militant Islamic group behind a series of bloody attacks in cities across the world.

His death, confirmed by officials in Pakistan, is a symbolic blow to al Qaeda.??It prompted jubilant flag-waving celebrations in Washington and New York.

It was the biggest national security victory for Mr Obama since he took office in early 2009 and could give him a political boost as he seeks re-election in 2012.

Mr Obama may now find it easier to wind down the nearly decade-old war in Afghanistan, begun after the September 11th, 2001, attacks on New York and Washington that killed nearly 3,000.

Mr Obama said US forces led a targeted operation that killed bin Laden in a compound in Abbotabad north of Islamabad.

No Americans were killed in the operation and they took care to avoid civilian casualties, he said.

A senior administration official said it was believed that three adults besides bin Laden were killed, including an adult son of bin Laden.

Car drivers blew their horns in celebration and people streamed to Lafayette Park across from the street, as police vehicles with their lights flashing stood vigil.

Many Americans had given up hope of ever finding bin Laden after he vanished in the mountains of Afghanistan in late 2001.