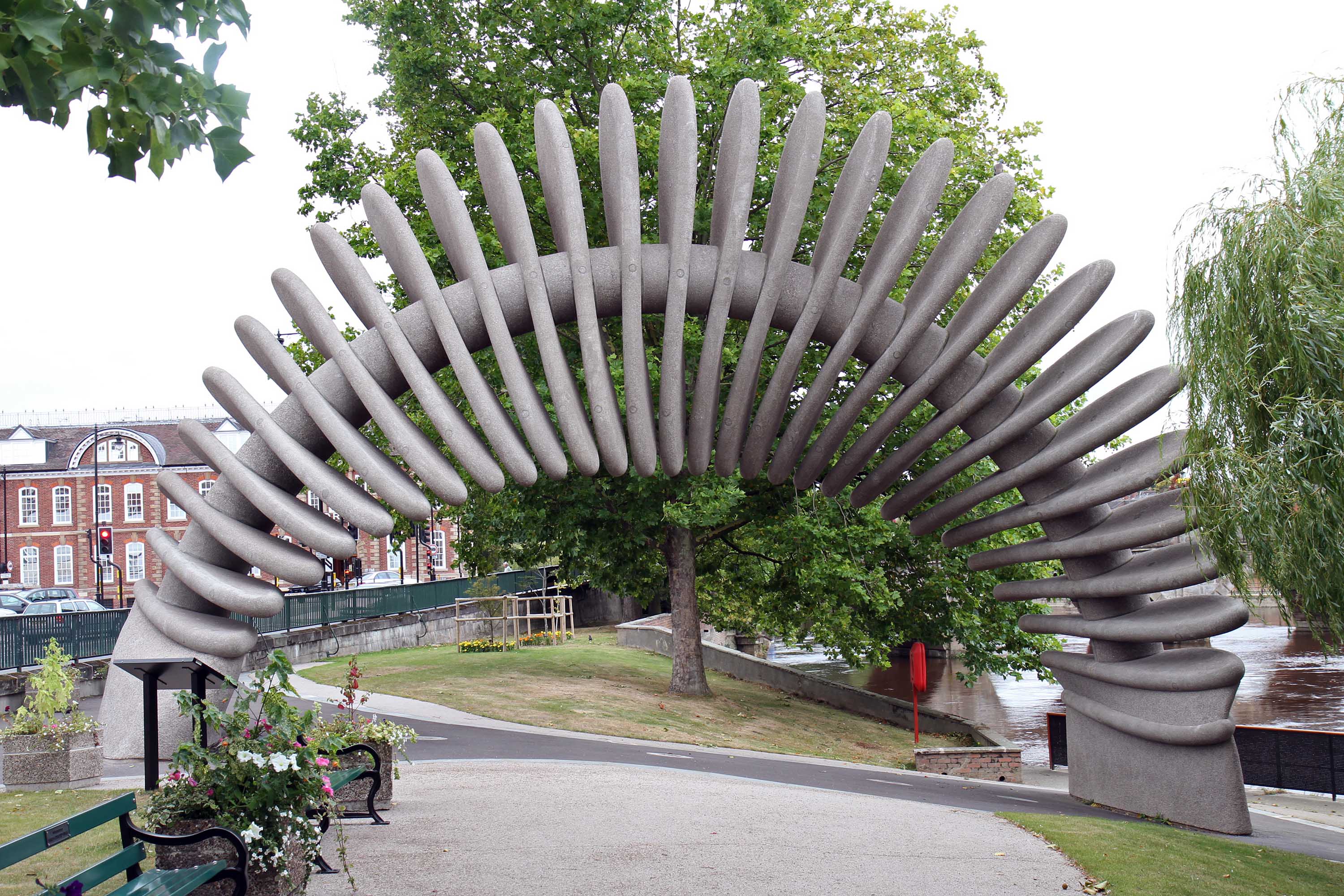 A CASH-STRAPPED council have been criticised for ‘wasting’ GBP1 million on an ‘eyesore’ sculpture which has been likened to a cow’s spine and a ‘massive slinky spring’.

Shropshire Council – who are cutting jobs in a bid to save GBP30 million – have so far spent over a million pounds on the project to erect the massive sculpture in the picturesque market town of Shrewsbury, in Shropshire.

The Quantum Leap structure was built to commemorate the 200th anniversary of the birth of Shrewsbury’s most famous son Charles Darwin.

But locals have complained that the money could have been much better spent on other things at a time when the council iss slashing its budget.

The sculpture was originally set to cost a total of GBP483,000, but a series of problems lead to costs spiralling and Shropshire council was eventually ordered by a court to  pay Contractors an extra GBP410,000 as well as dealing with a GBP115,000 bill for legal fees and professional advice.

This left the total cost of the sculpture past the GBP1million mark, angering many locals.

Shrewsbury resident Roger Williams said: “Does anyone in their right mind think anyone is going to visit Shrewsbury to view a GBP1million concrete slinky spring? I think everyone involved with that project needs their head examined!”

But Tim King, tourism officer for Shropshire council has claimed the statue will be part of attracting GBP137million to the town’s economy.

“It is public art, in itself it doesn’t generate anything, but it is part of a bigger Shrewsbury scene,” he said.

“It is part of the Darwin story which is one of Shrewsbury’s greatest strengths. The more Darwin products we have, the better really.

“We would like to see more things associated with Darwin in the town.”

But local Sarah May, 45, said: “I’m sorry but Mr King is talking nonsense people come to Shrewsbury for shopping, they came before the concrete slinky and they will come for years after it has crumbled into the river.”

Landscape gardener Mark Thomas, 33, added: “Everyone I know thinks it an eyesore, it just looks out of place in a historic market town like Shrewsbury.

“And the authority has a lot more on it’s plate than building pointless things like this. Its a gross waste of taxpayers cash.”

Felllow resident Glenn Roberts said: “They have got GBP1million for a lump of cement that does nothing but not to keep one of towns best known schools open?

“How does this bring money into the town? They think people will travel far and wide to see a stone look-a-like of a cows spine? There are too many deluded people in high places.”

Bob Lee, who works for the council, voiced his support for the project, but questioned the cost and the actions of council leader Keith Barrows.

“I do like it but at GBP210k,” he said. “At GBP500k I like it a lot less and at GBP1million I’m afraid to say every time I now look at it, it is with disdain, to think how many jobs would it have secured and services maintained.

“My big complaint is why are the council paying this inflated price?

“Surely you would not commission the sculpture on an estimate, the cost should have been fixed if it wasn’t installed correctly then the builders should have fixed it at their cost and what possible additional work would demand nearly a 5 times increase in the cost?

“It bothers me as an employee and as a council tax payer that all the contracts that the authority enter in to are done so with the same lack of responsibility and care.”

Matthew Elliott, Chief Executive of the Taxpayers Alliance, said: “Taxpayers have already forked out a huge amount cash on this sculpture, its completely unacceptable for them now to be lumped with another huge bill for the artwork.

“Poor project management has led to taxpayers being saddled with a further bill and no one seems to accept responsibility for the costly mistake.

“Someone needs to be held accountable for this waste which neither council or local residents can afford.”