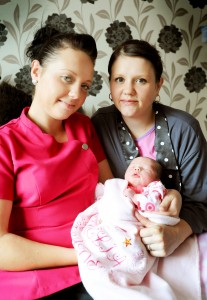 A QUICK thinking sister rushed to her sibling’s aid and saved her newborn baby’s life when she went into labour while in the bath.

Mellissa (COR) Fieldhouse, 23, had to bring baby Amelia Lawrence into the world after sister Hayley, 22, went into labour a week early while having a soak in the tub.

But the drama didn’t stop their as the tiny tot got into difficultly when her umbilical cord became wrapped around her neck and arm.

Fearing her niece would be strangled, the auntie had to act fast to avert tragedy and untangle the cord before paramedics arrived.

“I had to un-knot it from around her neck,” Mellissa, a dementia care assistant said.

“It was quite frightening. I was panicking. It was twice looped round her neck and stuck in her arm. But when I saw the cord around her like that I thought I had no time to panic.

“The paramedics said it was lucky I acted so quickly.”

The drama unfolded on Monday while full time mum Hayley, who also has a three-year-old daughter called Leah-Marie, was at home in Wednesfield, West Midlands.

Mellissa had just arrived at work when her mum rang to say Hayley had gone into labour.  But as she was over an hour away at a caravan site, it was down to Mellissa to rush to her aid.

Mellissa said: “When I got there she was sitting in the bath with her three-year-old daughter. She thought it was just pressure pains at first and then she said she needed to push and the baby was coming.

“I phoned an ambulance. The contractions were less than one minute apart so the lady on the phone said there was not enough time and I was going to have to deliver her.

“The head was their in a matter of minutes.”

Mellissa delivered the baby with the help of paramedics’ phone advice, who she put on loudspeaker while it was all happening.

It was when she was rubbing baby Amelia down she noticed the umbilical cord was double knotted over her neck and round her arm.

She continued: “It was when I turned her around to get the stuff of her I saw the cord around her.

“Hayley was in shock. She was shaking and just froze – her lips were turning blue.”

After releasing the cord from the neck, a relieved Mellissa wrapped Amelia in towels to keep her warm and waited for the paramedics to arrive.

She added: “The woman on the phone said I was going to have to deliver the baby. I never thought it would come that quick, it didn’t seem real. Amelia didn’t want to wait.

“Helping bring her into the world was amazing. The woman on the phone from the ambulance service was brilliant. Without her it would have been a lot worse.”

Hayley gave birth to little Amelia in the bath tub at 6.45am – just 25 minutes after she went into labour. Both were taken to New Cross Hospital in Wolverhampton

Describing the moment she brought her niece into the world, Mellissa added: “It was a brilliant experience. The cord bit was scary but it was a great experience.

“Both mum and baby are doing brilliantly.”

New mother Hayley, who is recuperating at home with Amelia, who weighed 6lb 14oz,  said: “I will never look at the bath in the same way.”