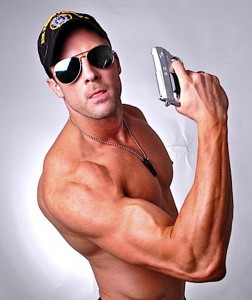 Hunky sex education teacher Benedict Garrett, aka Johnny Anglais, faces being struck off the teaching register after his seedy lifestyle was exposed while working at Beal High School, Ilford, Essex.

On the site, where he poses provocatively in firemen’s uniforms and bondage gear, he claims he has taught ‘young people to be open-minded, respectful, tolerant of others’ for the past four years.

It goes on to say he wants to  ‘unashamedly demonstrate the art of pleasure in the realms of fitness, sex and entertainment. ‘

Terese Wilmot, associate head of Beal High School, told the committee that an investigation had been launched into allegations that Mr Garrett was working in the adult industry in June 2010.

He was also found to have a sexual advice page on Facebook, under the name of ‘Johnny C**kfill’.

The committee was told that Mr Garrett was also investigated over concerns that he had contacted students via text messaging, e-mail and Facebook.

He had set up a second Facebook account under the name of ‘Zebrah Mahmood’ and left comments on pictures from a school trip to Spain.

After an investigation, a disciplinary hearing at the school in July 2009 resulted in Mr Garrett being issued with a final written warning.

Mr Garrett had submitted a letter of resignation in March 2010, informing the school of his intention to leave at the end of the academic year.

But he was suspended on June 29 2010 after allegations about his career in the adult industry surfaced.

He began working as a stripper in November 2009, the panel was told.

Presenting officer Christopher Whalley said: “The GTC’s case is that by undertaking work of a pornographic nature, that does undermine public trust and confidence, and brings the profession, and indeed Beal High School, into disrepute.”

Mr Garrett, dressed in a dark suit and glasses, represented himself at the hearing in Birmingham, and made an impassioned thirty-minute statement in his defence.

In a statement given to the panel at the conduct hearing, Mr Garrett again argued that teachers should be able to keep their professional and private lives separate.

He said that he felt it was important to “recognise that they are just a teacher and they have private lives.

“They may go out and get drunk off their faces,” he said.

“They are human and if they are doing it and it is legal that is their choice.”

Mr Garrett also said that he felt teachers have to live up to outdated standards.

He said: “I believe that if the General Teaching Council was to agree that what I did undermines public trust and confidence in the teaching profession, I believe that this is a symptom of what I call an immature national attitude to sex and viewing sex as a legitimate form of enjoyment and entertainment.”

The former teacher also admitted that he would speak openly with students – some in Year 7 – about sexual matters.

He added: “I was unembarrassed to talk about anything. I said ‘if you ask me in an appropriate manner I will tell you.”

Mr Garrett added that he thought schools should prepare children for the ‘real world’ and adapt to the increasing availability of pornography.

He added: “Being told that it’s wrong, that it’s immoral is not an appropriate response.”

Speaking outside the hearing Mr Garrett  said that he believed Brits are not open enough about sex.

He said: “We have one of the highest rates of teen pregnancy in the EU, and the reason is that we are just not open about sex.

“The habit is to shut it off and not talk about it.”

He added: “We have to prepare our students for the real world.

“Being naked is the most natural thing in the world.  I don’t see it as a damaging thing.

“Would I be embarrassed if a parent or student saw me naked in one of my videos?

“It might put them off having sex if they saw me.”

Teachers up and down the country drink and smoke but whether you agree with that or not it doesn’t stop them being amazing teachers in the classroom.

“I’ve looked up to people in my life but I didn’t expect them to be perfect in every realm of their lives.”

Mr Garrett admitted the allegations in principle but denied that they amounted to unacceptable professional conduct.