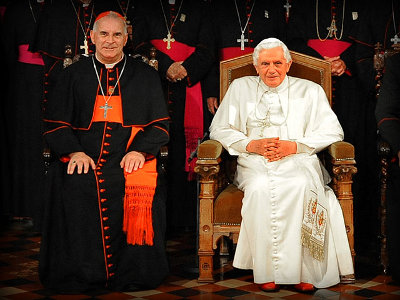 Cardinal Keith O’Brien has resigned his post as the UK’s most senior Roman Catholic clergyman.

His step down was announced earlier this morning (February 25th) and will take place with immediate effect.

The move comes after accusations of inappropriate behaviour toward fellow clerics were leveled at O’Brien, with the Observer publishing a series of allegations over the issue.

Three priests and a former clergyman voiced a number of complaints against the former Cardinal over several of incidents that took place over three decades.

One complainant required psychological treatment after claiming that O’Brien had entered into an “inappropriate relationship” with him.

The now-former cardinal rejected the allegations and was expected to continue in his role as head of the catholic church in Scotland until his retirement was scheduled in March.

O’Brien had been scheduled to travel to the Vatican this week to take his place in the conclave to choose the next pope, but his resignation will mean Britain forsakes its place in the coming election.

He stands accused of inappropriate contact with the complainants, with the group expressing fears over the possibility of a cover-up.

“The church is beautiful, but it has a dark side and that has to do with accountability. If the system is to be improved, maybe it needs to be dismantled a bit,” said one alleged victim.

O’Brien was ordained in 1965 and was elevated to the position of Archbishop of Saint Andrews and Edinburgh in 1985.

His resignation follows that of Pope Benedict XVI, who announced that he would be stepping down as head of the Catholic church last week.

Image used courtesy of the archdiocese of St Andrews and Edinburgh.