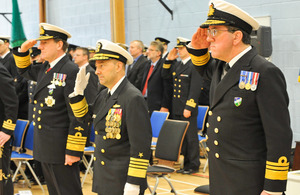 He replaces Admiral Sir George Zambellas, who took the reins of the organisation during its recent expansion.

Commenting on the appointment, defence secretary Philip Hammond hailed Admiral Hudson, stating he had no doubt he would continue Admiral Zambella’s record of success.

“Vice Admiral Hudson is taking command of the NATO Maritime HQ at an important time, with responsibility for the continuing NATO counter-piracy mission in the Indian Ocean and counter-terrorism mission in the Mediterranean,” he said.

Admiral Zambellas will replace Sir Mark Stanhope as First Sea Lord and Chief of the Naval Staff for the British Royal Navy in 2013.

He suggested that the organisation’s maritime wing would play a significant role in global peacekeeping in the coming years.

“The ability of maritime forces to achieve influence without embroilment has seldom been at so high a premium,” said Vice Admiral Hudson.

“In the future we will continue to be able to afford our political leaders viable options and our military commanders a variety of choices.”