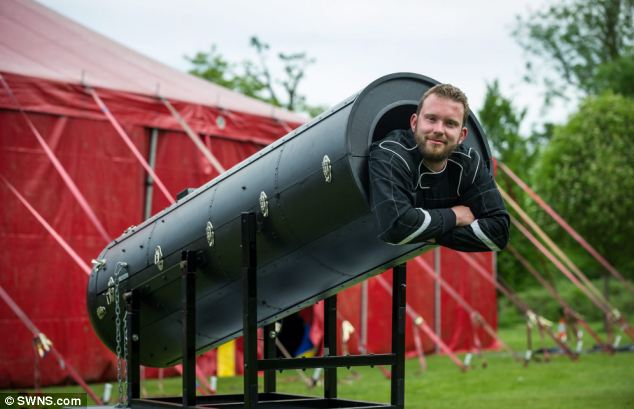 An Oxford graduate who ditched a high flying career to become a circus stuntman has successfully completed one of Harry Houdini’s greatest escapes.

Gary Stocker, 32, had a £1 million home and six-figure salary as a law writer and legal recruitment officer until he started performing in a circus two years ago.

And on Saturday (26/3) he took his achievements to a new level when he recreated the Water Torture Cell, made famous by Houdini – the world’s greatest ever escape artist.

In the death defying stunt Gary was imprisoned in chains and handcuffs and incarcerated in an aquarium filled with water, with only the time he could hold his breath to escape.

He spent four months tirelessly training for the stunt and came close to death in one rehearsal.

Speaking after completing the stunt he said: “The stunt went really well. The audience could sense that this was the very first time that I had ever performed it, outside of rehearsals, and so the tension was very high.

“While I have trained very hard for this stunt over the past four months, no training could have prepared me for the challenge of performing this in the bright lights of a packed circus Big Top.

“My adrenaline levels were much higher than usual and I could feel my heart palpitating in my chest.

“I couldn’t see the audience through the tank, but knowing they were out there watching me made me feel very nervous and caused me to lose my focus a little.

“During the first 20 seconds, I am supposed to have escaped both from my handcuffs and also from the loop of chain wrapped around my neck.

“However, during this live performance, I had barely got one hand free by the time the 30 second mark had been called by our ringmaster.

“This made me panic a little, but ultimately regained my focus and managed to escape within 1 minute and 37 seconds, which is not bad at all.

“If it had been over two minutes my team were instructed to break me out irrespective of my progress.

“I felt amazing, standing there in front of a cheering crowd, clutching the chains and padlocks which had failed to bind me.

“It was an awesome feeling of victory, and the reaction of the audience made it feel all the better.

“My body actually went into shock about 15 minutes after the show, once the adrenaline of the performance had worn off.”

During his preparation for the stunt Gary would practise doing simple tasks underwater to increase the amount of time he could function.

But even with his team on standby the stunt was not without its risks.

He added: “My team were always on hand armed with axes to break the 12ml perspex glass should anything go wrong.

“Once, during a rehearsal, I blacked out before escaping from my shackles.

“Apparently my team had real difficulty breaking the glass and there was a mad panic as they tried to get me out of the tank before I suffered any permanent brain damage.

“After that we made some modifications to the design.”

In 2014 Gary made the headlines with his previous stunt, a human cannonball.

Comparing the cannonball to his latest escapade he said: “As a human cannonball, the risks are largely outside of my control.

“So long as the safety checks have been completed, then once I am in the barrel then either it works or it doesn’t.

“This present stunt is far more dangerous because there are so many factors which can affect the time it takes me to escape from my cuffs and ultimately from the aquarium.

“In addition, to add to the theatricality, I need to make it appear that I am struggling, even when I am not.

“There is always a risk that my team could misconstrue my genuine pleas for help with acting; after all, my hands and legs are bound and they cannot hear me while I am submerged under water.”

Gary presents his stunts on the 1920s themed Chaplin’s Circus. The circus is currently touring and Gary will be performing his the water torture escape in Richmond, London, this week.