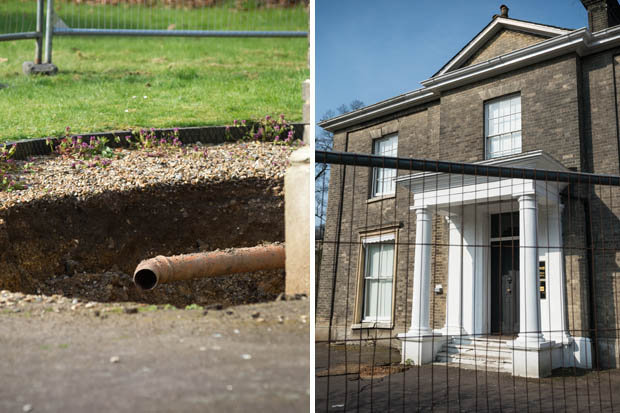 A 20ft deep sinkhole has suddenly appered – close to the spot where a double decker bus famously sank into another one in 1988.

The hole appeared on Friday, believed to have been caused by the collapse of an old mining tunnel beneath the ground.

It has closed the Plantation Hotel, in Norwich, Norfolk, and its surrounding gardens.

A cordon has been put around the hotel over fears the structure could collapse.

A large crack was visible near the main entrance and a nearby window was pushed out of alignment.

Roger Connah, chairman of the Plantation Garden Preservation Trust, said he had received a call from Tony Burlingham, who owns the hotel to make him aware of the problem.

Mr Connah said: “There is an issue of subsidence in the corner of the hotel with the cracks leading to a major wall in the Plantation Garden.

“So, the decision was quickly and sensibly taken to close the garden and they have had to shut the hotel.

“I don’t know how long that will be for, whether it is for a day or for a month. We’re waiting to see.

“But we’ve decided to keep the gardens closed until Monday, when we will decide what to do based on advice.”

Mr Connah said the Plantation Garden was itself a chalk quarry, with mining tunnels leading off it, which was transformed into a garden in the 19th century.

He said: “We had our own sinkhole about five years ago when a water pipe burst, but we know there are lots of tunnels in the area which used to be used for flint mining.”

Anglian Water attended, but confirmed it was not an issue with their equipment.

The location is just a stone’s throw away from where a double decker bus fell into a sinkhole in Earlham Road in 1988, making headlines around the world.

As the driver attempted to pull away, a large section of the road surface collapsed beneath the rear wheels.

An old chalk mine, dating from the 11th century, had given way, but the passengers managed to scramble clear.