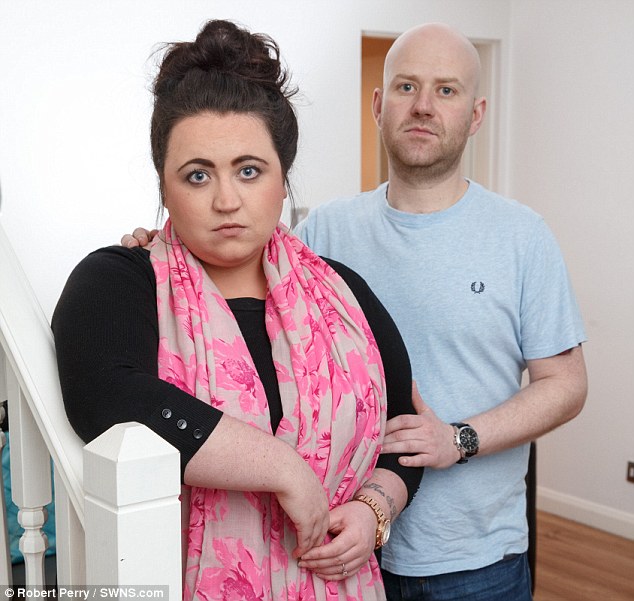 A bride-to-be says she has been left in a “nightmare” after a wedding organiser failed to supply services.

Louise Fagan, 25, has hit out at the bridal company La-Belle-Mariee Wedding and Events, accusing it of failing to provide bridesmaid dresses promised over a month ago.

And Louise has now been left £550 out of pocket as she had already paid the wedding service company which is now ignoring her calls – less than three months before her big day.

Louise, from Coatbridge, North Lanarkshire, and fiancé David Reilly, 32, are set to tie the knot on July 1 in Falkirk’s Airth Castle.

The couple, who got engaged in 2014, have booked essential wedding day services including dance floor, lighting, chair covers and bridesmaid dresses with the Falkirk-based company, run by Niki Burton.

Louise, a digital account manager, said they first booked the wedding company after seeing Niki prepare a wedding at their chosen venue last April but now they have forked out extra cash to pay for the services she had promised them.

She explained: “We had already booked the venue and we had a wee nosey into the room that we were going to have the wedding in.

“Niki was in dressing the hall for a wedding which was happening that day. It was lovely so I was talking away to her and she gave me her business card.”

Without hesitation, Louise decided to book the wedding firm’s services due to their competitive prices.

She said: “She gave me a quote for chair covers, sashes, LED dance floor, LED backdrop, mood lighting, candy carts – everything I needed.

But the price was unbelievably cheap compared to what I had been quoted elsewhere.

She said: “I jumped on it straight away and I booked it.”

The bride-to-be also arranged to have three bridesmaid dresses made by Niki, who says she is originally from Belfast but lives in the Falkirk area, after spotting that she was also a dressmaker on her official business Facebook page.

With competitive prices on offer again, Louise paid a deposit which brought the total handed over to the wedding firm £550.

But Louise grew suspicious when she was asked to fork out the full amount for the dresses.

She hadn’t received receipts for previous transactions and Niki has not respond to her messages.

Louise said: “I thought it was all legit at the time but now I feel like a total idiot.

“I had people who had been recommended to me and I was ready to book someone else but she came in with her low ball prices.

“It is a nightmare. Everything has been going right up to now. It’s totally ruined my wedding planning experience because this is all I am going to remember.

“The brides are all upset. Some are getting married in a few weeks she has ruined peoples weddings.”

The bride-to-be isn’t the only one who claims to have lost money, as business owner Thomas Callaghan says he has been waiting for a payment since last October.

Thomas, who runs Events by TLC and has been in the wedding business for 10 years, bailed the business out by providing services worth around £1,000 which he says he is yet to receive payment for.

Thomas said he supplied Niki with LED dancefloors after she contacted him – the day before weddings in Glasgow and Falkirk.

He says he still hasn’t been paid and he has even bailed out other brides who were let down last minute by Niki’s firm.

He also says several brides have created a Facebook page to offer support to each other after they were left out of pocket because of the business.

Thomas added: “The business is still going on and she has mistreated brides. I work closely with a lot of wedding companies, and if you pay cheap, you pay twice.”

Louise has contacted the police who are looking into her case.

A Police Scotland spokesman said: “We are aware of an allegation of fraud against a wedding and events company.

Several attempts were made to contact the wedding firm but there was no response.