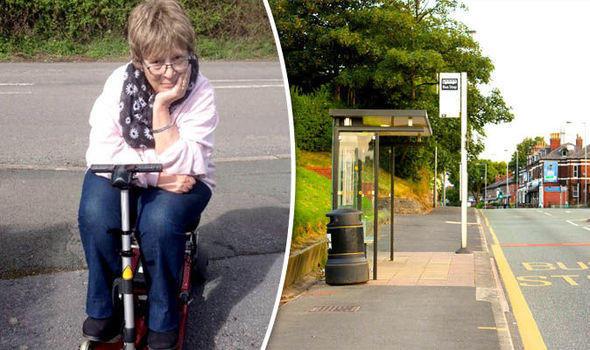 A disabled woman was left out in the cold after being booted off a bus as she did not have the correct pass – for her MOBILITY SCOOTER.

Barbara Wintersgill, 68, who has had Parkinson’s disease for ten years, was distraught after being forced to leave by a driver and left stranded several miles from home.

She eventually arranged for a friend to come and collect her but says the hour-long ordeal was traumatic.

She said: “I totally rely on my scooter because of her balance and mobility issues.

“I got on the bus eventually, as the ramp wasn’t working, and then the driver asked me for my scooter permit. I told him that I had no idea that I needed one.

“I have never been asked for one by any other driver.”

Barbara, who was in Cornwall visiting friends, had taken the train to Penzance on Saturday and intended to continue to Porthcurno on a First Kernow bus when she was stopped in her tracks.

She claims she showed her scooter pass for First Great Western trains but was told by the driver, who also checked with his supervisor, that she needed another pass from Cornwall Council to board the bus.

She added: “He refused to let me travel. To be precise, he said that my husband and dogs could stay on the bus but that I could not, unless I left the scooter behind.

“Obviously, I could not do this and he demanded that I get off the bus.”

Barbara, who lives with husband Ian, 70, in Ivybridge, Devon, said there were only two other passengers on the lower deck at the time and that, fortunately, a friend was available to collect her about an hour later.

She added: “We were going to see friends and it was a dreadful day and it was pouring rain.

“We waited to get picked up for about half an hour.

“If that’s the rule – how are you supposed to know it.”

Barbara complained to First Kernow’s customer services but claimed the response she got was “completely unsympathetic”.

She said: “When I asked how visitors to Cornwall were supposed to know about this requirement, I was told that it was fully explained in their terms and conditions.

“I pointed out that, realistically, few bus passengers were likely to look at this document. The humane, considerate and caring thing to do was to inform me that, next time I used Kernow buses, I must get a scooter permit, rather than throw me off the bus.”

First Kernow said: “It is our policy that all users of mobility scooters should obtain approval from us prior to their journey.

“If we are satisfied they meet the necessary criteria, we issue a standard permit to travel.

“In this instance, we are very sorry that the lady was unable to board the bus because she did not have a permit to travel.

“We do ensure that our customers are aware of our policy about mobility scooters through on-bus posters, and information at bus stations and on our website.”