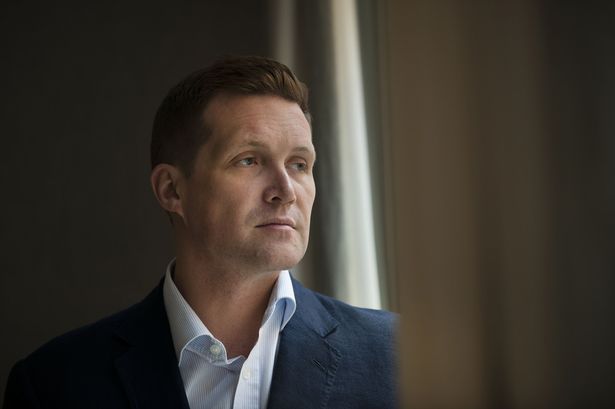 A former football club boss has described his two years hell in a stinking Dubai cell on a trumped–up charge.

David Haigh, 38, said he was punched, tasered and hit with a broom handle and torched during his incarceration at Bur Dubai police station.

The ex-managing director of Leeds United was arrested in May 2014 after flying to the UAE for a meeting with the club’s former owners Gulf Financial House in Dubai.

Mr Haigh, who led the negotiations for GFH’s takeover of Leeds United in 2012 from businessman Ken Bates, believed the meeting was about setting up a private equity investment house.

But instead he was confronted by a local police officer who accused him of an irregularity with a cheque.

He was then taken to a police station where he attempted to repay the small amount of money owed – but then found himself locked up on a trumped-up charge.

In his first interview since his release last month he said: “They take me to a room at the side.

“They keep me waiting for an hour, then another hour, and then a lady came in and said ‘did you take 23 million?’.

“I had gone from running a football club, to having stomach surgery, to getting on a plane, to landing, to sitting in a police station, being whacked in the face by some dodgy police guy wearing a green uniform, shouting at me in Arabic ‘where is the money’.”

Mr. Haigh was told he wasn’t getting bail and was led down a corridor into a cramped detention centre without any further explanation of the charges against him.

He added: “I will never forget, the smell got so bad as you walked towards the door where they were going to put you in.

“It was horrific, a mixture of everything you don’t want to smell in your life.

“They opened this iron door and pushed me in, and slammed it shut. There were no papers, or ‘this is what you have been accused of’, that was it.”

During his time in a hot, dirty prison cell where sewage was leaking everywhere he was denied access to his money and deprived of medicine he needed after his stomach op.

He was only allowed to speak to his lawyers for two minutes a week and was subjected to and witnessed torture during his time behind bars.

He said: “They came and got me in the middle of the night, they took me outside to the car park, then moved me into a room, and then I was quite seriously physically abused, tasered, whacked in the face, made to stand in strange positions, and told repeatedly ‘where is the money’. I was told if I confessed I could go home. I said I wouldn’t confess, I didn’t do it, you can carry on torturing me.

“You are surrounded by this depravity. I will never forget, I was sitting there and the police are torturing a guy behind me.

“I don’t know what he had done, but they had thrown him on the floor, tasering him, kicking him in the head, three or four of them, getting a catapult, putting it on his testicles.

“The mental anguish that puts you through, that you are under a constant threat of abuse, that continued all the way through.

“A month before I left where I was recently, I was standing in the corridor waiting to get some painkillers and a guard came and hit me over the head with a broom handle for no apparent reason.”

In 2015 he was found guilty of “breach of trust” by defrauding GFH of £3m by falsifying
invoices and diverting money into accounts controlled by him.

He was released earlier this year, but had his time in custody extended after allegedly abusing GFH on Twitter.

The additional charge was dropped after his case was taken up by Human Rights Watch, which criticised the “repressive” Emirati cybercrime laws.

Since returning to the UK Mr Haigh has been spending time with his family in west Cornwall but is in the process of taking legal action over his treatment.

He lost around 40kgs in weight during his incarceration and said the impact on his health has been “kind of bad”.

He added: “The abuse I suffered, I was punched around, I was hit, I was tasered. People attempted to sexually abuse me.

“I have a problem with my eyes, you are constantly kept in the dark, the lights are very rarely on, so you can’t see properly, it damages your eyes.

“Just the unbelievable stress you go through, you are trying to defend yourself and tell the world.”

He said his ordeal should serve as a warning to Brits travelling to the Emirate.

He added: “If I can stop one 20-year-old British kid who gets caught drinking a bit too much on the beach, goes to Dubai thinking it is a great holiday destination, he goes out with his mates and has a drink, causes offence to a local, he gets put in prison and they torture him, if I can stop that one person, that is enough for me.

“Yes it is a nice place to visit, but if there is an issue, or if you fall foul of a vindictive person, and they are everywhere, then you have got to be careful.”