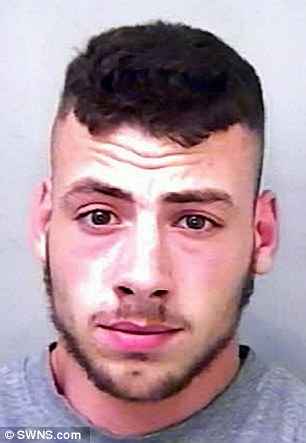 A driver “shattered” the lives of two young boys after he killed their mother and hatched a plan to destroy the evidence.

Jimmy Quibell, 21, was travelling in excess of 50mph in a residential area when he hit mum-of-two Emily Chambers.

The tragic incident happened in the early hours of August 15 and within just five minutes of the crash Quibell “hatched a plan” to get rid of the evidence, Judge Jeremy Richardson QC said.

A court heard Quibell was seen revving and driving in the middle of the road when he appeared to veer to the right.

Witnesses said they heard a loud thud before the 30-year-old mum, who had stepped into the road, was seen lying on her back on the footpath.

Quibell, of Scunthorpe, North Lincs., has now been jailed for eight years.

Quibell’s friend Raymond Mawson, 18, of Scunthorpe, was sentenced to two years for helping Quibell dispose of the car.

Prosecuting, Megan Rhys told the court at around 1.30am two cars, including the silver Vauxhall Golf driven by Quibell, which was stolen the day before, were parked in an area known as “the garages” with “music blaring out”.

Quibell and Mawson, who was in a Vauxhall Vectra, noticed a couple arguing as they walked along a footpath.

Miss Rhys said: “Mawson said he was going to see what they were arguing about. His driving was normal, within the speed limit.

“Quibell set off, revving up, accelerating hard and shooting off at speed. He was driving down the centre of the road. As he neared Mawson he appeared to veer to the right hand side of the road. Witnesses heard a loud thud and a man was heard screaming and shouting.”

Witnesses said Quibell’s car did not stop. It was estimated he was driving between 50mph and 60mph. Both Quibell and Mawson left the scene.

The 30-year-old mum, who was left lying on her back on the footpath, died at 7.45am from multiple injuries.

Five minutes after fleeing, Quibell was seen filling a can at a petrol station and at 2am a couple saw two cars driving in Scunthorpe, one by Mawson and one by Quibell. The couple later saw an orange glow and realised one of the cars they passed had been set on fire, the court heard.

Quibell handed himself in later that day after he was named on Facebook, Miss Rhys said.

The court heard Quibell had a provisional licence only and had taught himself to drive.

During an interview with police, he at first said it was not him and became abusive, telling officers he had a short temper because he had been injecting himself with steroids twice a week. He later admitted he had been driving the car and said he did not stop because his passenger panicked and told him to keep going.

“He did not realise until much later on that she died, he thought she would ‘have just broken her leg or something’,” Miss Rhys said.

The court heard Quibell had numerous previous convictions for dishonesty and driving offences including in 2013 when he was given a community order for perverting the course of justice after he set fire to a motorbike “to remove forensic evidence” after his friend was involved in a fatal crash.

Mitigating, Graham Pressler said Quibell accepted he should not have left the scene and asked the judge to “accept his genuine remorse”.

“His words were I have taken a life. I have got to live with that for the rest of my life,” he said.

Sentencing Quibell to eight years, Judge Jeremy Richardson QC said: “The consequences have been devastating for the family of the deceased. She was a young woman aged 30 and had two sons aged 10 and nine. Their lives have been wrecked by your conduct. You have shattered the lives of those two young boys and the family.

“Having hit her with your car you displayed not a shred of concern for her. You drove off leaving her for dead in the road. Within five minutes you hatched a plan to cover up your criminal conduct. A plan, I might add, you had executed in the past in almost identical circumstances. You were driving too fast in an arrogant and dangerous fashion without a hint of concern for anybody but yourself.”

Addressing Mawson, he added: “You having observed the scene offered no help and drove off too.”

Quibell was also disqualified from driving for nine years and will have to take an extended test.

Mawson, who admitted perverting the course of justice, was sentenced to two years.

Speaking after the verdict, Emily’s sister Vicky D’ascenzo, said: “He (Quibell) killed my sister and drove off and burned the evidence. Two boys lost their mother and he gets eight years.”