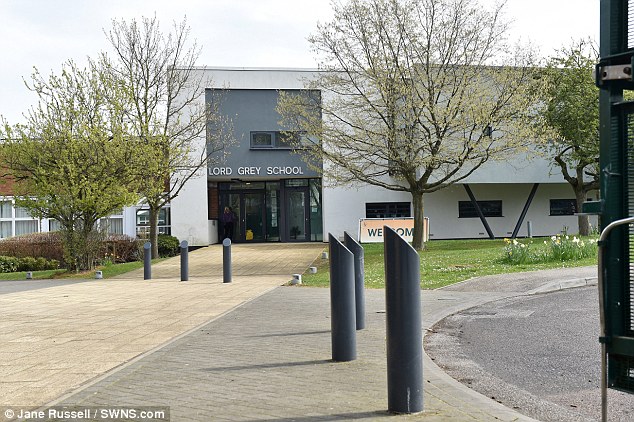 A headteacher has vowed to continue sending female students home if their skirts are too short – to stop boys ‘peering up them’ when they climb the school’s stairs.

Dozens of pupils were turned away from the gates of the Lord Grey secondary school in Bletchley, Bucks., at the start of the new term because their skirts were too short or their trousers too tight.

But despite a barrage of complaints about children being sent home without their parents being contacted, the headteacher has said students will carry on being turned away if they do not comply with uniform rules.

“They should look demure and modest and not appear over-sexualised in figure hugging trousers or very short skirts.

“We have a tower block with six flights of stairs.

“The last thing we want is boys peering up girls’ skirts while they are climbing the stairs.”

Dr Jones said students and parents were given ample warning that the uniform check would happen on the first day back after the Easter holidays.

They were greeted by teachers at the school gates on Monday morning, and turned away if they did not pass a stringent uniform check.

Furious parents claim up to 70 youngsters were sent home, while Dr Jones says the number was 29 – the equivalent of an entire class.

“We warned that students would be sent home if their uniform did not comply. School rules state skirts should be knee length and trousers should be loose fitting,” she said.

However, many parents are unhappy with the move as they claim their children’s uniform is not inappropriate.

One parent, who has not been named, took a photograph of her 14-year-old daughter who was sent home, standing next to her classmate whose trousers passed the test.

She said: “My daughter is on the right and it’s almost impossible the spot the difference between their two pairs of trousers. ‘

“I think the school is being absolutely ridiculous and loads of parents are really cross that their children were sent home.

“We bought my daughter’s trousers in New Look, from the school uniform section.

“I can’t see how they are inappropriate in any way.”

The school website states that “the wearing of a distinctive school dress makes an important contribution to the tone and reputation of the school; gives students a sense of belonging, and stops students coming to school in clothes which are unsuitable for school.”

It goes on to dictate that students must wear black tailored skirts or trousers – skirt must be at least knee length and trousers must be slightly loose and loose at the ankle.

Parents have also criticised the school, which has a ‘good’ Ofsted rating, for sending youngsters home alone without contacting their parents, many of whom were at work.

But, Dr Jones is sticking to her principles, and added: “The parents were warned. They have no grounds for complaint.

“In fact, we will be conducting further uniform checks throughout the term – and we will send students home again if necessary.”