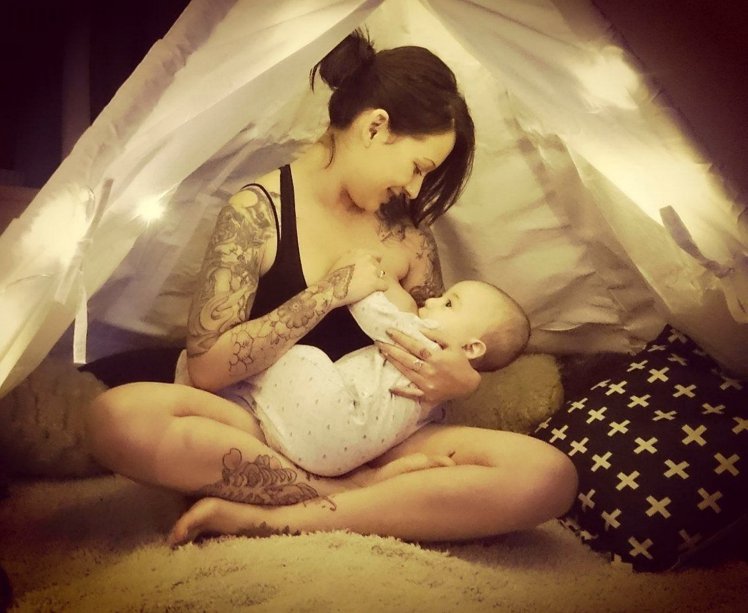 A mum let five complete strangers breastfeed her son while she was treated in hospital – after making a Facebook appeal for volunteer ‘wet nurses’.

Ronja Wiedenbeck [CRRCT], 26, was suddenly taken ill and put on strong medication which left her unable to feed 11 month-old Rio.

The worried single mum-of-two went onto the ‘Breastfeeding Yummy Mummies’ Facebook group from her hospital bed asking for women to help feed her son.

Within an HOUR a stranger was by her hospital bed nursing little Rio, who won’t drink milk from a bottle or formula and has a mix of breast milk and solid foods.

And she was reduced to tears of joy as she was bombarded with nearly 1,000 offers from women all over the country offering to feed him.

During her stay in hospital last week, five different women fed healthy and happy Rio – with two even taking him home to nurse him throughout the day.

Ronja, who was at the Royal Cornwall Hospital in Truro, said: “I was pumped full of morphine and it seemed instinctive for someone to feed him in a way that he has been used to and he’s comfortable with.

“When he was about to be fed by the first lady he looked over at me, almost to ask for approval, it filled my heart with such joy and massive relief.

“I’m so grateful and totally overwhelmed with the response to the message.

“It is such a loving and selfless act and incredibly heart warming to see.

“There is so much negativity around breast feeding, it is absolutely incredible to have this support when I needed it.”

Amateur model Ronja has suffered with ovarian cysts throughout her life and was rushed to hospital from her home in Penzance, Cornwall, last Sunday (3) in extreme pain.

She was given morphine and anti-sickness drugs which make it impossible for her to safely feed her son, and put a shout out to other mums on Facebook.

The mum, who breastfed her now six-year-old daughter Lily Eve for three years, had plenty of frozen expressed milk in the freezer, but Rio doesn’t like using a cup.

She had never considered wet-nursing before but was worried about her son becoming dehydrated.

She wrote on Facebook: “I am in Treliske Hospital in Truro, Cornwall.

“I have a 10 month old baby boy who I can’t nurse due to being pumped full of Morphine.

“I don’t suppose there is anyone who would come and nurse my son for me a couple of times today please? I’d be ever so grateful.”

The first ‘feeder’, Leigh Ann Fearn, saw the shout out and immediately messaged Ronja before joining her in hospital around an hour later.

“I thought Rio would look over at me and be like ‘mum, I’m not doing this’ but as soon as she picked him up he was tugging at her top.

“He looked at me as if looking for approval, and I said ‘go on Rio’ and he latched on brilliantly.

“I thought it might feel unusual because it is something special that only Rio and I had shared, but it just felt totally instinctive for another mum to help him in a way he was used to.”

Ronja says around 1,000 women from the 13,000 strong group contacted her offering to breastfeed Rio, and a friend has been sifting through the messages to coordinate feeds.

Five different women fed him – including two in their own homes – before she was allowed home at the weekend (9/4).

The women had previously undergone CRB checks and were accompanied by Ronja or another family member or trusted friend.

Mum-of-three Michelle Netherton, 28, from Truro, breastfed Rio in the hospital the day after Ronja posted her appeal.

Michelle, who has never been a wet nurse before, said: “When I saw the post I thought ‘poor baby’. I wanted to help because I would never see a baby go hungry.

“I am constantly pumping off excess milk so it was nice for it to go to a baby.

“I was a bit nervous that he might cry and not latch on, but he didn’t mind whose boob it was – as long as it was a boob!

“It’s amazing to hear the amount of people who have helped or offered to help Ronja – that’s mummy power for you.”

Ronja is now at home and able to feed, and doctors are carrying out further tests.

She added: “There are so many negative stories out there about breastfeeding it is so heart-warming to have witnessed the support I have had.

“People might feel it is unusual but wet nurses used to be much more common, and I hope I have shown other women that it is an option.”

Ronja’s friend is fundraising £200 to help pay the travel costs of local mums picking up and dropping off Rio at hospital and home, and perhaps continue the service.