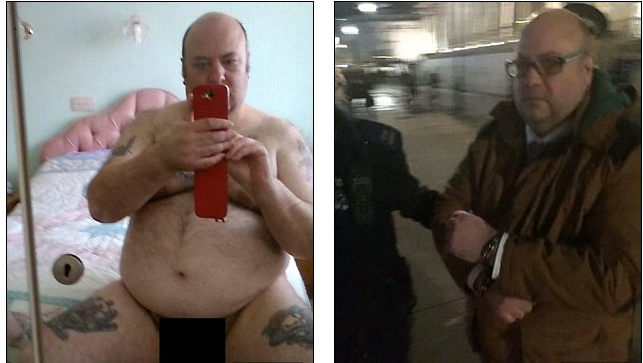 A paedophile snared by online vigilantes when he arranged to meet a fictional underage girl for sex has been jailed.

Pot-bellied Mark Gosling, 45, groomed what he believed were three 15-year-old girls and even sent nude pictures of himself and explicit messages on Facebook.

Father-of-one Gosling, who lives with his mother, then offered to meet one of them in Trafalgar Square, central London.

But activists from cyber hacking group Anonymous, who were in fact running the social media accounts, were waiting to confront him.

The online vigilantes – who dubbed themselves “Operation Paedophile Hunter” – are from hacking collective Anonymous, notorious for posing in Guy Fawkes masks and their high-profile security breaches.

The court heard he began talking to the “girls” last September and even sent them pictures of his naked body and erect penis.

One let him know she was a virgin, but he still went to the meet-up at Trafalgar Square on December 11th.

Jailing Gosling, Judge Alistair McCreath told him: “There can be no doubt at all that on the occasion when you were arrested you had come to London to meet someone you believed to be a 15-year-old female child.

“Your advocate states on your behalf that you believe it was not against the law to have sexual relations with a 15-year-old child.

“I simply can’t accept that is possibly true.

“You may not be a great reader of news papers and you may not have many friends but in overall context you live in a society where there are much publicity in the news I can’t believe you thought it lawful to do what you so certainly intended to do.

“You had met this apparent child and you had groomed her.

“I have no doubt if you met a child of 15 you would have done your best to fulfil the intentions you spoke of in texts and other messages.”

He jailed him for 20 months and said he will produce a sexual offenders prevention order in due course.

“He believed they were 15-year-old females but, unbeknown to him, Elizabeth Mury, Chloe Hugh and Sammi Jones were in fact members of a paedophile-hunting online group.

“In respect to Elizabeth Mury he sent naked pictures of himself and arrangements were made for a meeting which in fact never happened.

“He never met or intended to meet Chloe Hugh but in relation to Sammi Jones he sent pictures of his penis and he arranged a meeting.

“That meeting was going to take place at Trafalgar Square on December 11, 2015.

“He wasn’t met by Sammi Jones, he was in fact met by three members of the paedophile hunting club.

Officers searched one of the vigilante’s phones to find he planned to have penetrative sex with the “girl”.

Mr Walker said: “The person he believed to be the 15-year-old Sammy Jones he was telling her he intended to have sexual intercourse with her and there were sexually explicit messages.”

At a previous hearing Ish Sheikh, prosecuting, said the group were from Anonymous and detailed the explicit messages.

He said: “Before that he was saying things like ‘Do you all want my c**k’ because one girl said she was coming with a friend.

“He also asked on if she had had sex before and when she said no he said ‘I’ll be kind, I won’t hurt you’.

“The group confronted him and they recognised him by the fact he sent photos of himself.”

Ghulan Humayun, in mitigation, said Gosling was a “social loner” who has lived with his mum since 1988.

He said: “He currently lives with his mother and has done since 1988.

“He has no social circle. His only social contacts are his brother, his mother and his son and the mother of his son as well.

“He doesn’t have any friends. He’s a person you might describe as a social loner.”

Mr Humayan also tried to use in mitigation that neighbours have since started calling him a pervert at the bus stop.

But the judge said: “It’s not very kind but it is understandable.

Before he was jailed there was a discussion over his intentions when he went to the meet-up.

But Judge McCreath said: “He didn’t go there to discuss what particular hobbies she liked, did he?”

He was previously advised in error to actually meeting the girl but he withdrew his guilty plea and instead admitted attempting to meet her.

During the episode he seemed confused and became teary.

Gosling, who wore a white shirt and pink tie, admitted one count of attempting to meet a child after sexual grooming.