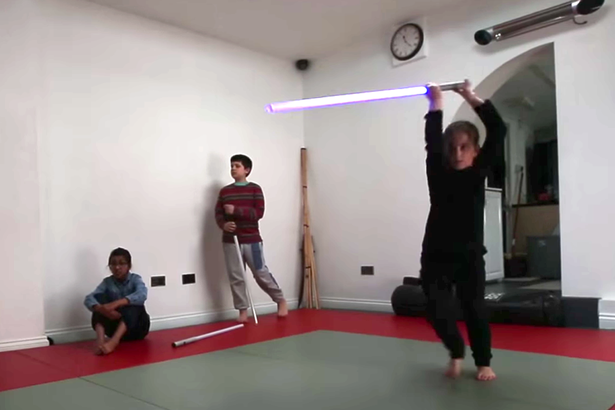 A martial arts instructor is offering kids the chance to learn the ways of the Force with their very own lightsaber – in JEDI school.

The classes combine historical long sword techniques with the twirls and turns seen on the epic movie series.

The youngsters, who are encouraged to design and make their own costumes, learn techniques passed down from generations of fencing experts, using lightsabers that make the familiar iconic sound.

Faisal, 42, said: “These sabres help the children focus because they light up the imagination as well as the blades.

“The parents were as interested as the children were and so we offered adult classes too.

“This was before we knew about the new film and we thought we’d go with it and we’ve now managed to produce a martial art that reflects the well-known science fiction movies.

“Some of the kids come in dressed as Darth Vader and we encourage people to have a laugh and enjoy themselves.

“We are a professional martial arts club with an inclination for dramatic theatre.

“The kids all want to see these twirls and spins and we award additional points for dramatic effort, fencing isn’t always the best of spectator sports and so we’re trying to give the audience something exciting to watch.”

Fiasal, who also works as a Tai Chi instructor, set up the Silver Sabres Combat Academy two years ago in Finsbury Park, north London and says the lightsaber is the ideal training weapon.

In March the discipline was endorsed by British Fencing, allowing other teachers to train children and adults and begin new coaching programmes.

Since the latest film, Star Wars: The Force Awakens, the instructor says he has been inundated with kids and adults who want to learn how to fight.

He said: “Before we started a student pulled out an LED sabre and even though I’ve spent years studying swords I never realised they existed.

“I’d been looking for a way to fence without using steel or wood, because for those you have to wear so much armour you can’t move naturally. So as a practice tool, this is absolutely ideal.

“I am a born and bred star wars fan so I absolutely love it.

“Since we started the LED sabre lessons we’ve been inundated with members which is great because it means these traditional arts are again part of popular culture through these amazing stories.”