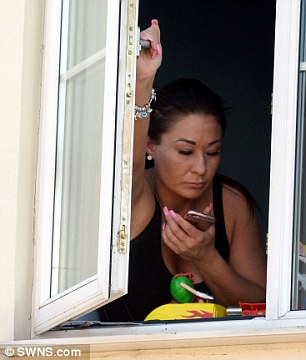 A spurned boutique owner bombarded her ex-boyfriend with hundreds of sexually explicit pictures and videos of herself after he dumped her, a court heard.

Glamorous Nicole Peri, 30, hounded her former lover Timothy Harris with racy shots of herself, videos of them together and teary audio messages of her asking to see him.

Over five weeks, she left 300 missed calls on his phone – one day calling 130 times – before using different numbers to contact him when he blocked her.

Peri, who runs an upmarket fashion boutique in Norwich, Norfolk, was spared jail by magistrates who ordered she undergo “emotional management” and problem solving instead.

Prosecutor Sharon Hall told Chelmsford Magistrates Court that police were called out several times from March 2015 to deal with altercations between the couple, whose relationship was described as “on-off”.

She read a statement from Mr Harris, which revealed he had been bombarded with messages and calls since February 29.

It went on: “I estimate I’ve had over 300 missed calls from private numbers. I don’t answer all the calls.

“One day in March I was at the gym and had 130 missed calls.

“I have ignored all these messages, hoping they would stop but they didn’t. I don’t know what else I can do to stop her contacting me. I continue to feel there is no escape from Nicole.”

The court heard how following a call from Peri’s mother, who lives in Norwich and Cyprus, begging for him to meet her as she was “in a really bad way,” he agreed.

He went to tell her it was over to allow them both to move on but it ended in an argument.

Mr Harris said in his statement that he felt guilty that things had got this bad, he wanted “to give her closure”.

However after their meeting he said that she resumed efforts to contact him, the court heard.

He added: “All I want is for her to leave me alone and stop harassing me. The whole thing is making me feel low, like I cannot live a normal life and move on.”

Peri, of Rayleigh, Essex, pleaded guilty to one offence of harassing Mr Harris between 28 February and 2 April this year by phone and social media.

Magistrates imposed her with a one-year community order, with 120 hours unpaid work and ordered that she undergo a 20-day rehabilitation requirement.

Peri was also slapped with a bill for £165 court costs.

She was banned from making any contact with Mr Harris, or going to his address in Chelmsford, Essex, after a 12-month restraining order was granted.

Miss Hall said Peri, who has no previous convictions, claimed in her police interview the contact was “two ways”.

The court heard Peri’s Boutique in Norwich has been closed for the past week.