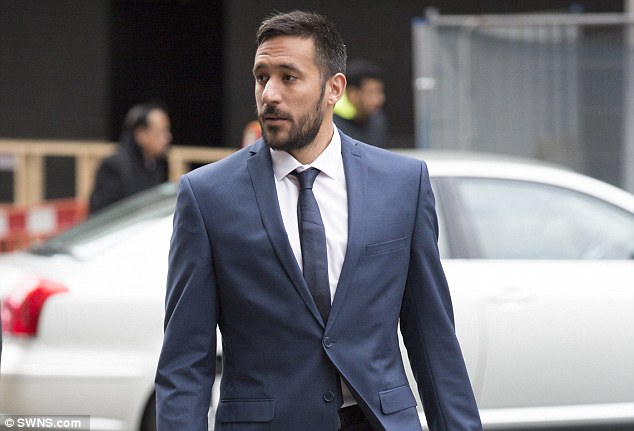 Ex-Premier League star Jonas Gutierrez is in line for a bumper payout after winning a disability discrimination case against Newcastle United.

The Argentine midfielder took his former team to an employment tribunal after they “froze him out” and refused to offer him a new contract at the end of last season.

The 32-year-old said billionaire owner Mike Ashley put pressure on managers to drop him because they considered his health a “liability” after he was diagnosed with testicular cancer.

Former manager Alan Pardew claimed Gutierrez wasn’t part of his future plans two years before he got cancer and the decision not to renew his contract was a purely “footballing decision.”

But yesterday (Thurs) it emerged he has now won his claim that he was less favourably treated by the relegation-threatened club as a result of his disability.

The tribunal also found Newcastle had not made “reasonable adjustments due to his disability” and a two day remedy hearing will decide what settlement he will receive.

He was originally suing the club for a loss of earning totalling £2.15 million.

The judgement, released yesterday (Thurs), states: “The claimant’s claim of less favourable treatment because of the protected characteristic of disability contrary to sections 13 and 39 of the Equality Act succeeds.”

The employment tribunal in Birmingham heard if Gutierrez started 80 Premier League games in four years from 2011-2015, the club would have automatically renewed his contract.

But by the close of the 2014/15 season, he had played 78 games and his contract was ended over the phone by manager John Carver.

Guiterrez claimed he was not picked for the first team after returning from his cancer battle in a deliberate attempt to oust him from the club.

He also repeatedly complained to the club doctor about pain in his groin which was “aggravated during sex” but said his concerns were dismissed as “nothing serious.”

The footballer broke down in tears as he gave evidence and told how he was forced out by the club hierarchy, which left him feeling “humiliated.”

He said: “From the way I was treated, I understood that the club hierarchy – in particular the club owner Mike Ashley and the club managing director Mr Charnley – were
concerned about my cancer diagnosis and were either trying to force me out of the club permanently or to ensure that I would not be selected to play in games which would force Newcastle to extend my contract by one year.

“Due to their concerns about my cancer, I consider that the club then ensured that I would not be selected to start in a sufficient number of matches to trigger the option.

“I believe that the reason for this was due to my cancer diagnosis and very recent operation to remove the tumour, as I had clearly been a crucial part of Newcastle’s first team lineup to this point.”

His mother also said she had considered committing suicide at the door of St James Park after the club treated her son “like a bad dog.”

But Pardew, now Crystal Palace boss, denied they had treated him unfairly and added: “My particular concern with Jonas related to the low number of goals he scored.

“He had scored only three goals in the 2010-11 season which, for an attacking midfielder, was well below what I would have expected.”

Gutierrez signed for The Magpies in 2008 and earned £42,000 a week but was diagnosed with testicular cancer in October 2013.

But two months after his operation then-manager Alan Pardew told the player he was no longer in his plans and could look for a new club.

He signed for Norwich on loan in January 2014 but had to undergo chemotherapy that summer after the disease returned.

The player then rejoined Newcastle later that season and played an influential part in keeping them in the Premier League.

He scored an important goal against West Ham in a 2-0 victory on the final day of last season to secure the club’s survival making him a legend among the Geordie faithful.

Two further claims of “unfavourable treatment” as a result of his disability and “harassment relating to disability” were unsuccessful.