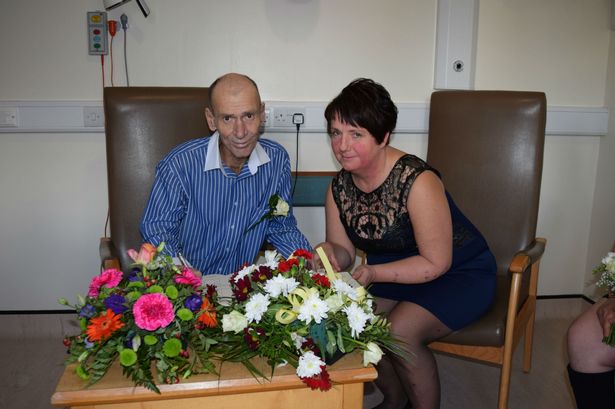 A new bride has spoken of her heartache after marrying her husband for a second time – just days before he died.

Jane and Steve Cottam first married in 2001 but split six years later due to pressures on their relationship.

However, unable to forget each other, the pair reunited in 2011 and thought it was their happy ever after.

But the couple were dealt a devastating blow when Steve, a steel erector, was tragically diagnosed with terminal cancer at age 52.

With just weeks to live, the two, from Chorley, Lancs., married again in March this year but devastatingly, Steve died a few days later.

Jane, 51, was pleased she and Steve were able to have the beautiful wedding day they deserved.

She said: “It seems really unfair that cancer took Steve from me after we’d just found each other again.

“But having such a beautiful wedding day at St Catherine’s Hospice has really helped me.”

Steve and Jane first met in 2001 when Jane asked Steve to buy her friend a Baileys from the bar while she went to the toilet.

To her surprise, when she returned, Steve had bought the drink.

Jane, who has three grown-up children, said: “We then hit it off and we were so busy chatting, I totally forgot to pay him for the Baileys he bought for my friend.

“It became a standing joke between us and Steve would often tease me, saying: ‘You never did pay me for that drink’.”

Despite the unpaid debt, their relationship blossomed quickly and the pair moved in together.

Jane said: “My divorce was going through at the time and I was a bit scared about committing again, but it just seemed so right.”

They got married in December 2001 and were happily married until 2007, even living in Cyprus for a short time before returning to Lancashire.

However, in 2007 various factors led to the pair parting ways but instantly Jane knew they had made a mistake.

She said: “I wanted to be with him but at that point I felt I needed to concentrate on my daughter who was quite young and had already seen one messy divorce.

“I thought Steve and I splitting up was for the best, sometimes you have to put your children first.

“I think I realised I had made a mistake by splitting up and the love was still there.

“We stayed friends and we were always there for each other when we needed it.”

As time went on, their friendship developed and, five years ago, they became a couple once again.

However, their happiness was short-lived when Steve was diagnosed with cancer over the Valentine’s weekend.

Jane, who works in a bakery, said: “Steve had been experiencing pains in his arm for a while but we put it down to his job and he had been on painkillers.”

As a steel erector working in a physical job, the pain in his arm was put down to a previous injury and an operation carried out five years ago.

But then, in January this year, Steve found a lump on his arm and an MRI scan eventually revealed an aggressive sarcoma tumour which had spread.

Jane said: “It was a huge shock. The hospital told me that Steve had stomach cancer which had spread to his shoulder and spine.

“He also had cancer in his arm and shoulder and it had spread to his vertebrae and there were shadows on his lungs.

“They told us it was terminal and gave Steve weeks to live.”

Steve went into St Catherine’s Hospice a week after his diagnosis and Jane said they were both fearful about what that might hold.

Jane said: “We were both scared, but there really was no need to be.

“St Catherine’s made such a difference to Steve’s life, and mine.

“They treated Steve like Steve, not just a patient and the support they provided to us both was incredible. I don’t think I would have got through it without them.”

As soon as Steve was given his diagnosis, the two decided that getting married again was exactly what they want to do.

They mentioned their wishes to staff and volunteers at St Catherine’s Hospice and a moving ceremony was arranged within a couple of days and the couple shared their special day with family and friends on March, 2.

Jane said: “It was such a special day which meant so much to us.

“It was something we really wanted to do and the team at St Catherine’s brought everything together to make it happen.

“Within a few days of arriving at St Catherine’s we’d made the decision to do it and we can’t thank St Catherine’s enough for all the effort they put in to make it such a wonderful day.”

Jane and Steve said their vows with Jane’s daughter Vic Tootell as Steve’s best man – sporting a skirt with shirt and tie in honour of the occasion.

Afterwards they celebrated with banners, balloons, a buffet, Prosecco and wedding cake.

Despite struggling with Steve’s death, Jane has said the wedding has helped her deal with the pain.

She said: “I don’t think his death has really sunk in with me yet.

“But having such a beautiful wedding day at St Catherine’s has really helped me.

“I could not have arranged anything nicer even if I had months and months to do it.

“Our wedding day was calm and peaceful, but emotional too.

“Even the registrar ended up in tears and found it difficult to read the words.”

Steve passed away at the hospice and Jane held his hand as he peacefully slipped away.

In-patient unit manager at St Catherine’s Hospice, Tracy Parkinson said it was an honour to have hosted Steve and Jane’s wedding day.

She said: “Hospice care is about being here for all of the many different things that are important to a person and their family at that particular time.

“This could be more obvious things like making sure someone has the right pain relief medication, but it also goes much further than treating physical symptoms.

“Getting married was something which was very important to Jane and Steve and we were delighted to have been able to help organise the occasion for them here at the hospice.”