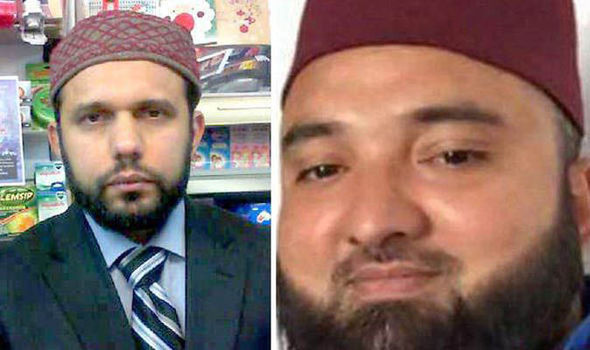 Muslim leaders across the UK have been urged to publicly condemn a “disturbing” statement issued by the killer of “Happy Easter” shopkeeper Asad Shah.

The Ahmadiyya Muslim community, to which the 40-year-old victim belonged, have warned that the brutal killing could set an “extremely dangerous precedent” to other extremists.

And their leaders have now revealed that members have been living in fear after being at “the receiving end” from extremist fellow Muslims for years.

The call comes after taxi driver Tanveer Ahmed, 32, from Bradford, issued a bizarre confession in which he admitted the brutal killing of Glasgow shopkeeper Mr Shah.

His statement was released by lawyer John Rafferty following a brief hearing at Glasgow Sheriff Court on Wednesday.

Ahmed had made no plea or declaration and was remanded in custody.

In his statement he said he killed much-loved family man Asad Shah, alleging the shopkeeper had claimed to be “a prophet”.

He also said that if he had not done this “others would and there would have been more killing and violence in the world”.

Ahmed denied that the murder had “anything at all to do with Christianity or any other religious beliefs”.

But the Ahmadiyya community have now urged all Muslim leaders to publicly condemn Ahmed’s statement, following a meeting at Baitur Rahman mosque in Glasgow yesterday (Thurs) where Mr Shah was a member.

Ahmed Owusu-Konadu [corr], external affairs secretary for the mosque, said: “Tanveer Ahmed’s statement means every Ahmadiyya Muslim member is liable to be killed so we had to go public to condemn this.

“Tanveer Ahmed, who brutally committed such an atrocity, has said in his statement that he murdered Mr Shah because he ‘disrespected’ the Prophet of Islam and Islam.

“This is deeply disturbing and sets an extremely dangerous precedent, as it justifies the killing of anyone – Muslim or non-Muslim – whom an extremist considers to have show disrespect to Islam.

“In some countries Ahmadiyya Muslim members, Christians and people of other faiths are routinely attacked and murdered by extremists for accusations of blasphemy.

“Such killings are completely against the teaching of Islam. We must not let the same mindset of hate and violence take root here in Glasgow.

“We urge the government and law enforcement agencies to take all possible measures to root out all forms of religious hatred, intolerance and sectarianism.

“If extremists are given a free hand, we will come to see the same levels of religious hatred and persecution here in the UK that we see in some Muslim countries.

“We urge all religious bodies, especially all Muslim leaders and Imams, to come out in public to condemn this statement made by Tanveer Ahmed, so that all Muslims know this is never accepted in Islam. This will go a long way to help eliminate all extremists.

“Committing atrocities has no place in Islam. It must end here. Such extremist views cannot be tolerated in Scotland, or the UK.”

Mr Owusu-Konadu said the community were now working closely with the police, adding: “We need to be very cautious.

“We are working with the police to ensure all the appropriate measures are taken. We cannot sit idle, we must protect ourselves.”

Since the brutal attack on Mr Shah outside his shop in the Shawlands area of Glasgow there have been no other threats received by the Ahmadiyya community.

And so far, Ahmadiyya leader say, only the Christian Church has reached out to show support and sympathy to Mr Shah’s mosque.

Abdul Ghaffar Abid, Scotland’s regional president of the Ahmadiyya Muslim community, said members had been at “the receiving end” from extremist groups over the years.

He said the community were now living in a state of fear.

He said: “After an incident like Mr Shah’s death it is natural for members of our community to be afraid.

“We have little threat from the majority of Muslims in Glasgow though, it is only the very small minority.

“We do not know the other Imams’ state of mind, it is not our job to find out what they think. No mosque has individually approached us.

“Over the years our community has been on the receiving end from extremist groups.

“This is not the first incident but it is the first murder. As a result our members are generally concerned about it. The police have advised our members and helped with security at their homes and businesses.”

Mr Abid added: “We have warned our members to be careful and to take extra precautions.”

“We are taking precautions. In my own home I have CCTV. I am extra cautious because I know there are extremists out there.

“We are not expecting any more attacks or anything. This is an instance where someone traveled more than 200 miles as a result of hate preaching.

“Some people who are not highly intelligent are easily used by hate preachers in mosques. People, like Tanveer Ahmed, can be brainwashed.

“They think they can do this and become a hero. To go and kill somebody is a way out for the to get to paradise.”

Popular Mr Shah was stabbed to death and had his head stamped upon the night before Good Friday, just four hours after wishing a Happy Easter to “my beloved Christian nation”.

Ahmed, who is believed to have driven 200 miles from Bradford to Glasgow in his private hire Uber taxi, was arrested at the scene.