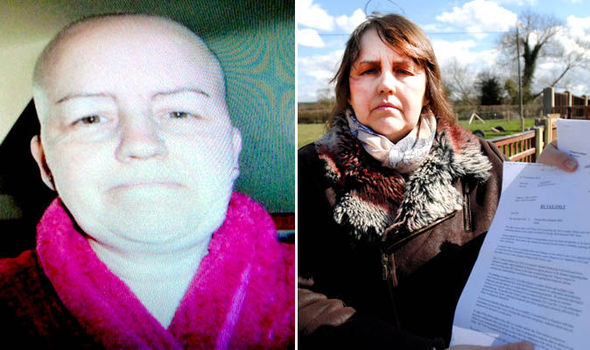 A grandmother has been awarded thousands of pounds in compensation after bungling doctors misdiagnosed her ovarian cancer – as irritable bowel syndrome.

Beverley Scott, 53, was repeatedly told she had the treatable condition for 18 months despite begging medics for a second opinion.

Shockingly, when doctors finally correctly diagnosed her with ovarian cancer it was too late to operate and she has now been given a maximum of two years to live.

After taking legal action against the NHS, she has now received a £37,500 out-of-court settlement.

Beverley, who used to work as an estate agent, said: “I am so angry it’s unbelievable.

“l’ve been left to die. I feel let down. I’m the one now suffering and the suffering is unbearable.

“I have gone from a girl who was a sales negotiator, full of life, very ?amboyant and arty to someone who lives week to week not knowing the outcome.

“I am not living a life me anymore, I am living an existence.

“It is life-limiting which means they don’t quite know how long I’ve got.

“There is no more they can do, they can’t shrink the cancer and it doesn’t respond to chemotherapy.

“To me I’ve now got terminal cancer. It’s like being on death row.

“I can just about plan what I am doing next week but I can’t plan next year, I can’t even plan this Christmas.”

Mum-of-two Beverley, from Polesworth, Warks., was referred to a gastric team when she first went to hospital in early 2012 with a bloating stomach and pelvic pain.

An ultrasound failed to find the root of the problem and she underwent a colonoscopy at the George Eliot Hospital in Nuneaton, Warks., in June that year.

That found thickening in the mid and lower abdomen as well as nodularity in the pelvic region near to the bladder which suggested Beverly had signs of cancer.

But she was told the results were “normal” even though surgery or chemotherapy would have been appropriate.

Beverley’s problems orsened over the next few months and she became virtually housebound with her husband Stephen, 54, becoming her full-time carer.

She underwent further tests and check-ups but was repeatedly told that the symptoms she was experiencing was irritable bowel syndrome (IBS).

By August 2013 her health had deteriorated so much that she could barely walk due to pain in her pelvis and she also suffered from varicose veins.

She had an appointment with a vascular surgeon at the George Eliot Hospital and was quickly referred to an oncologist after test results showed white dots over her pelvic region.

She was then given the devastating news she had stage three advanced peritoneal ovarian cancer in September 2013.

Beverley underwent six cycles of chemotherapy but in January 2014 doctors found it was having little effect on the cancer.

She then had an exploratory procedure the following month at the University Hospital in
Coventry, which revealed the cancer had spread and was inoperable.

Beverley said she spent months going back and forth between different departments at the George Eliot Hospital in 2012 and 2013 before she was eventually diagnosed.

She added: “Each time, my friend and I asked them if l had cancer.

“And each time they said they either didn’t know or my symptoms were a result of irritable bowel syndrome.

“They kept having meetings and I kept having tests but it was lie after lie and cover ups.

“I literally went back and forth between the gastric team and the gynaecologist. I basically lived at that hospital.

“I went into shock when I was finally diagnosed.

“It was more of a shock for me to get the diagnosis as I had been led to believe that I was okay.

“To have left me to the point that I was beyond surgery is wrong.

“I felt like I had gone through all that for nothing.”

Beverley took legal action against George Eliot Hospitals NHS Trust and was due to attend a court case in Birmingham in August this year.

But NHS bosses have now admitted responsibility and apologised to Beverley who will received a £37,500 out-of-court settlement.

The NHS Trust admitted it would have been reasonable to achieve an earlier cancer diagnosis and not doing so was a “breach of duty” in Beverley’s care.

In a statement George Eliot Hospital NHS Trust apologised to Beverley for the “unnecessary pain and suffering” caused by their delay.

Chief executive Kath Kelly said: “On behalf of the trust l would like to convey my sincere apologies for the failure to diagnose Mrs Scott’s cancer sooner.

“The trust expresses its apologies to Mrs Scott for the unnecessary pain and suffering she experienced due to this delay.”