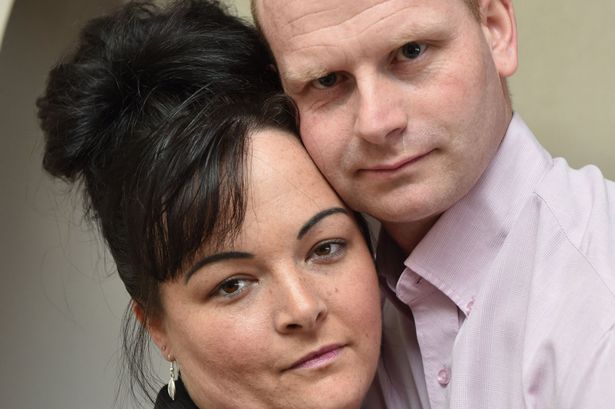 A mother-of-four has vowed to stand by her husband despite him being found guilty of raping a seven-year-old girl.

Michael Duncan, 33, faces more than a decade in prison for historic child sex crimes which happened 19 years ago when he was 14.

But his wife Jolene, 31, who has been his sweetheart since they were teenagers is convinced he is innocent.

She said: “There is nothing about my husband that I do not know, and I will never believe he did these terrible things.

“If I thought he was a child rapist I would not stay with him for one minute. I’d take our children and be off like a shot.

“The first we knew about it was when police knocked on our door out of the blue two years ago.

“We never dreamed Michael would be found guilty.

“We’ve been together for 19 years, since we were teenagers, and we’ve been married for nine years.”

Duncan, from Milton Keynes, Bucks., pleaded not guilty to raping a seven-year-old girl and indecently assaulting an eight-year-old girl he was babysitting.

During a week-long trial Aylesbury Crown Court heard the historic sex offences took place back between 1996 and 1997 in Milton Keynes.

He was convicted of both charges on Monday.

But Jolene is convinced the allegations stem from a vendetta which goes back to the 1990s.

The couple, who have four sons aged between four and 10, are now anxiously awaiting the sentencing on May 3.

They have been warned Mr Duncan, a former MK Dons steward, will face up to 13 years in prison.

Jolene said: “I have to tell the children that daddy will be going to prison.

“It’s horrible and we are terrified they will be bullied and called names at school because of it.

“But we will all be there for him every step of the way. I will never stop loving him and neither will his children.”

“The victims have had to relive the offences by going through the legal process and I am pleased the jurors have convicted him.”

Mr Miller praised the victims for their courage in giving evidence after so many years.