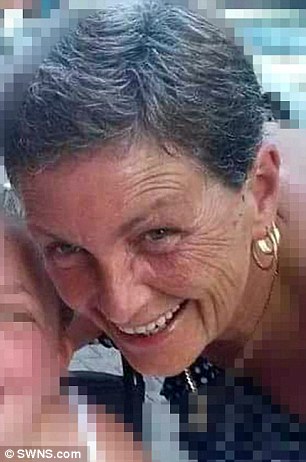 A prisoner delivered a “ferocious kick to the jaw” of a Serco guard’s head causing her fatal “catastrophic brain injuries,” a court heard.

Humphrey Burke allegedly kicked Lorraine Barwell in the head so hard it fractured her jaw causing a bleed on the brain.

The 23-year-old pretended to faint while being transferred from the cells of Blackfriars Crown Court to jail and then he lashed out in June last year, it was said.

His first kick knocked Mrs Barwell to the floor and while crouched the second hit her head making a loud cracking noise.

Two days after the attack the 54-year-olds’s life support machine was switched off by doctors.

Burke had pleaded guilty to two armed robberies in which he had threatened betting shop staff and damaged screens with a claw hammer or by setting it on fire before the attack.

He was due to stand trial for her murder today at the Old Bailey, but he found not fit to plead, and is now facing trial of the issue of whether he committed the act alleged.

Opening the case, Duncan Penny QC said: “On June 29th, last year, the defendant, Humphrey Burke, was a prisoner in the cells in the crown court at Blackfriars.

“As in the past when appearing at the court and being taken from holding cells, the defendant was proving uncooperative.

“After he made his appearance in court the defendant collapsed to the ground when being removed from the holding cell in which he had been placed downstairs.

“Whilst attempts were being made to get him to his feet so that he could be placed in the prison van and returned to prison, the defendant aimed two kicks at the head of Lorraine Barwell, one of the Serco officers concerned with his removal.

“Lorraine Barwell died as a result of the blows to her head. She suffered catastrophic brain injuries for which she did not recover.

“Two days later on July 1 2015, the life support machine which had been sustaining her existence since her arrival at the Royal Free Hospital a few days earlier was switched off.”

The court was to the cause of death was given as traumatic intra-cranial subarachnoid haemorrhage and the fatal kick fractured Mrs Barwells a lower jaw.

The jury was told Burke was charged with her murder, but the court had determined he is “not fit to be tried in the conventional manner”.

Prosecutor Duncan Penny QC said three consultant forensic psychiatrists found he “is currently under a disability in that he suffered from paranoid schizophrenia and is not currently fit to be tried”.

He said: “That means you will not be asked to return a verdict of guilty or not guilty.

“Rather you will be asked to determine whether he did the acts which are charged as the offences.”

Burke had appeared at Blackfriars where he pleaded guilty to two attempted robberies of bookmakers in North London in October 2014.

Mr Penny said: “The defendant had however previously behaved in an unpredictable manner both whilst in the dock and whilst custody, by doing what?

“By pretending to have fainted and going limp.”

Court staff were aware he had acted in an unpredictable manner and at 1pm Mrs Barwell and two other female colleagues, one who was on their first day shadowing another, went to collect Burke to take him from his cell to the prison van.

Mrs Barwell had handcuffed herself to him “as per standard procedure” and they then began to make their way to the cell door.

He collapsed to the ground and “went limp” and other staff came to help , it was said,.

As he was moved into the main corridor outside the cell the handcuffs were removed from Mrs Barwell.

Three male officers attempted to get Burke to his feet but he started to struggle again and forced back to the floor.

Mr Penny said: “The male officers then attempted again to get him to his feet again to stand up.

“As he was standing up the defendant was bent forward whilst Lorraine Barwell was standing in front of him attempting to control his head.

“Once on his feet the defendant was kicking behind him without making contact. He then appears to have lunged forwards and managed to kick out twice towards her.

“He seems to have kicked at her twice, the latter kick connected with her head.

“It is not clear whether the first kick also connecting with Lorraine’s Barwell’s head or her torso, or perhaps her leg, but it was delivered with sufficient force to knock her to the ground such that she was on her knees or crouching down when the second kick was delivered.”

Mr Penny told the jury they would hear from a number of witnesses who were in the cells as they tried to get Burke to his feet, including Martin Walker, who heard a “cracking sound” when the kick connected.

Another witness, Delft Warden told she heard the kick make the “sound of a proper thud” and saw Mrs Burwell’s “eyes were rolling back and were complete blank”.

Mr Penny said: “The picture appears to be reasonably clear there were two kicks.

“The first caused Lorraine Barwell to stumble or fall to the ground, and the second was delivered whiles she was right in front of the defendant on her knees or at least crouched down, such that he was able to deliver a ferocious kick to the jaw.

“That blow appears to have been the fatal blow.”

Burke, of Oxford, was remanded in custody.