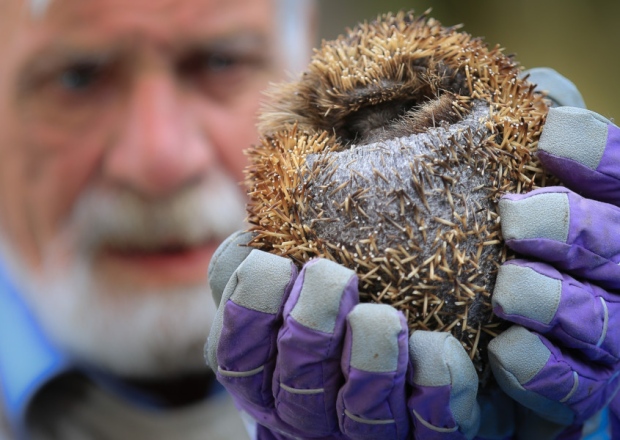 A hedgehog found in student halls with its spines cruelly cut is now “eating for England” as he recovers from his near-death experience.

The hedgehog, now re-named Frank by staff who have discovered he is male, spent his first couple of days at the shelter curled up into a ball, but has since poked his nose out in search of food.

Allan said: “He was near death when he came to us, within another 24 hours he would be dead.

“Now we could do with a hedgehog nosebag, because he’s eating for England.

“Yesterday he came out of his ball. It was the first time we had seen his face. He’s a bit more relaxed but he’s still terrified.”

Allan has been feeding Frank a diet of worms and cat food to fatten him up.

He said: “That’s the best thing to give him because his bones are showing through and he needs fatten him up.

“It’s costing me a fortune to keep him. The other day we put some cat food in a bowl while we were cleaning him and he had eaten the lot before we had finished so we had to get another pouch out for him.

“We have to keep giving him a variety of different cat foods as hedgehogs can be quite fussy and refuse to keep eating the same food over and over again, so he’s had a mix of duck, chicken and turkey.”

The Broadhead said they had never seen a hedgehog Frank’s state when he first came to them, after being found by a maintenance man in the early hours of Saturday morning in student halls at the University of Sheffield, South Yorks.

Frank’s spines appear to have been cut off with scissors and he was suffering from a fungal skin infection, but luckily none of his bones were broken.

Allan hopes Frank, who was originally called Frankie because they weren’t able to get close enough to him to determine his sex, will now make a full recovery and his spines will regrow.

He said: “Hedgehogs do have a horrible way of just turning off and dying.

“It’s common, especially when they have been so traumatised. But I think he’s going to be all right.”

The University of Sheffield is investigating why the hedgehog was in the student halls.

A spokesperson from the university said: “We are currently trying to find out why the poor hedgehog was in our university accommodation.

“It’s good to hear the hedgehog is now doing well at the Cawthorne Hedgehog Rescue and Care Centre.”

The incident has also been reported to the RSPCA.