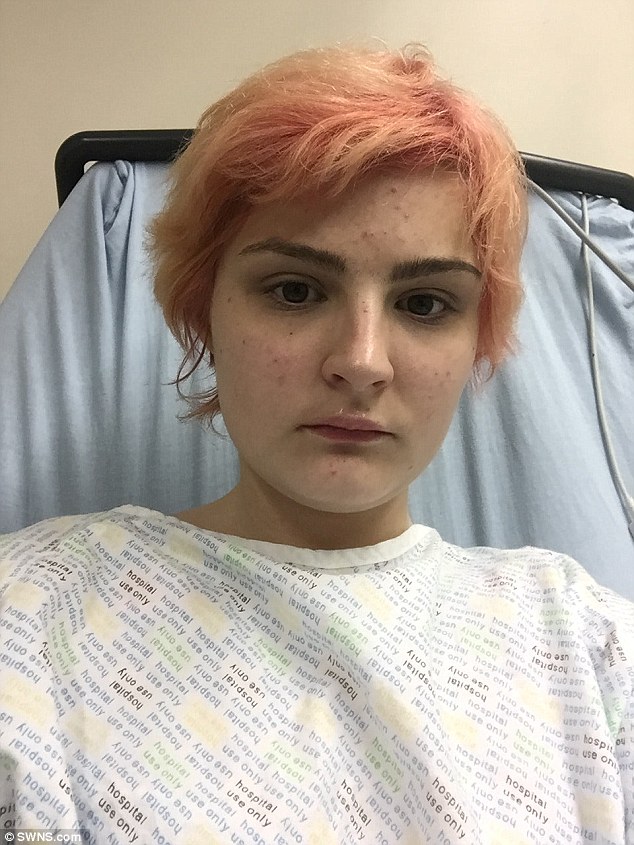 Taylor Hannah, 19, turned to taking weight loss pills after medication for her bipolar condition saw her weight balloon from 10st to 14st.

Taylor used them for six months until she had to be rushed to casualty and put on a drip because of severe dehydration.

Now, the teenager has lost almost half her body weight and still struggles with eating.

Taylor, from Greenock, Inverclyde, said: “I almost died from dehydration and needed to be put on a fluid drip due to excessive vomiting. I was really ill, couldn’t move and had chest pains.

“I have now found out they have torn my stomach lining.”

The petite 5ft 3in teen lost almost half of her body weight since taking the pills and being unwell, dropping from 14 stone to a tiny 7st 9lb.

She was admitted to hospital on February 5, and said the whole experience was terrifying.

She said: “I thought I was going to die. I was constantly being sick and if I hadn’t gone to hospital when I did, I would have died because I was so dehydrated.

“No amount of water would fix it. I was drinking up to six or seven litres of water a day and nothing helped. Doctors told me the caffeine from the diet pills could have caused the dehydration.”

Taylor later discovered that one green tea tablet is the equivalent of FIVE cups of green tea.

Taking the recommended one tablet a day for almost three months – Taylor ingested a whopping 420 cups of green tea before switching to the fat metabolisers in November.

When the teen first became unwell in November, she believed it was simply a bad reaction to the green tea tablets.

Taylor, who used to wear size 18 clothes, can now fit in to age 10-11 childrenswear.

She said: “I researched diet pills loads before I actually bought them.

“Then when I went into the shop the girl recommended these two in particular, telling me they were the best.”

The green tea pills, retailing for £19.99, claim to boost metabolism which assists with weight loss.

But Taylor now believes it is these pills that made her unwell.

She added: “The GP said it could possibly be the diet pills, and another doctor said he has also had reports that they can rip your stomach lining.”

Still in chronic pain, Taylor is only able to eat yoghurt and drink milk. Anything else can cause severe vomiting and make her stomach swell.

She said: “I’m struggling to eat without vomiting and sometimes I can’t even drink water. I get a burning sensation and then I’m sick and then get severe stomach cramps.

“It’s slowly getting better but I’m still not sleeping because I’m in so much pain.

“The cramps keep me awake at night, it’s horrible because I’m so hungry but I can’t eat anything because it hurts too much.”

Taylor now feels angry with herself for ignoring friends warnings and buying in to the diet pill fad.

She said: “I feel ridiculous for taking them now. Everybody told me not to.

“I fell into the trap of feeling pressured to look a particular way, and took a short cut to achieve it. I regret ever taking the pills.

“I want people to know that just because pills may be herbal doesn’t mean they are safe.

“These pills are still being sold to teenagers as young as 16 and I don’t want anyone at any age to go through what I am going through.”

A spokesperson for Holland & Barrett said: “All our products are manufactured to the highest standards, used by tens of thousands of people every day.

“We have never received a complaint of this kind from these products before.

“Certain products we sell, including weight management supplements, do carry an on-pack warning instructing customers to consult their GP if, for example, they are already taking prescribed medicines.

“Clearly we are concerned to hear of any customer reportedly becoming unwell, and we would always urge customers to seek advice from our team of nutritionists or trained store staff.”