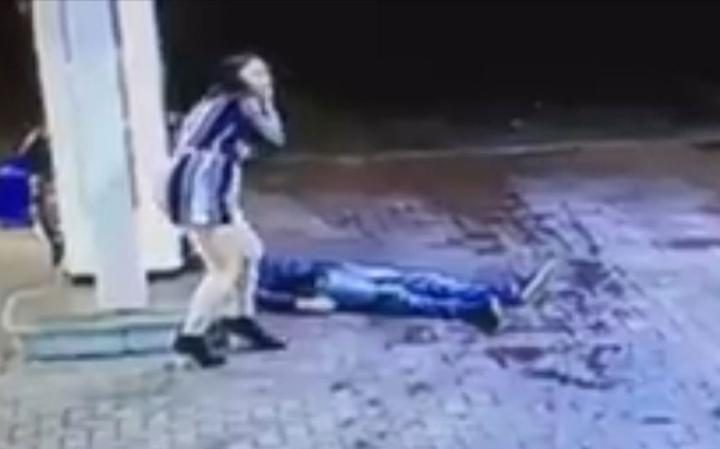 This is the shocking moment a gang of thugs kicked a man unconscious on a garage forecourt before repeatedly booting his head against a petrol pump.

The man, in his 20s, was left with a fractured skull and eye socket, but survived the sickening attack which was captured on CCTV.

The footage, taken from the Gulf petrol station on Bristol Road, Birmingham, at 4.30am on Saturday (9/4), shows the man desperately trying to run away from his attackers.

He is seen to stumble and fall against a car which had finished filling up at the pump before the driver speeds off.

The victim falls over and is kicked and punched repeatedly by two Asian men while he holds his hands up begging for mercy.

The 1.09-minute clip shows the men kicking his head dozens of times before he slumps unconscious with his head resting at a grotesque angle at the foot of the petrol pumps.

A young woman wearing a dress and high heels comes to the man’s aid but is forced to flee when a hooded yob marches over to the unconscious man and jabs him in the throat.

Another man is then seen rifling through the injured man’s pockets. The man is seen to come to but is savagely kicked in the face knocking him out again.

The three yobs are then seen casually walking away from the man who lies motionless on his back.

Pritesh Pattni, 45, manager of the petrol station, posted the footage on Facebook in a desperate bid to catch the thugs.

The married dad-of-three said: “It is the most shocking, savage attack I have ever seen.

“I was not at the petrol station at the time but my staff said that a taxi pulled up with three men inside.

“They started having words with a group of men and then punches were exchanged. They chased one of the men onto the forecourt and he fell over.

“He was punched and kicked against the petrol pump. It was sickening the way he was attacked while lying unconscious.

“The attackers were Asian and black. I don’t know if it was racially motivated or not. I have passed the footage onto the police who are investigating.

“I understand the victim was taken to hospital and suffered a fractured skull and eye socket. He could have easily been killed.”