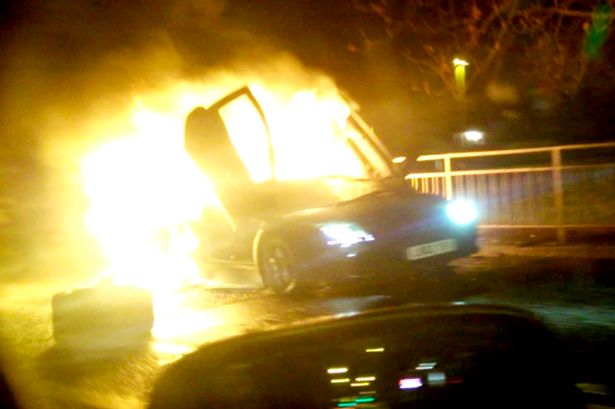 A worker who wrote off his boss’s £200,000 Lamborghini supercar after taking it for a cocaine-fuelled joy-ride was banned from driving yesterday (tues).

Cary Atkins, 29, smashed the purple, limited edition Murcielago into a set of railings shortly before the vehicle erupted into a fireball.

Yesterday (Tues) Atkins admitted the charge of driving a motor vehicle with a proportion of a specified controlled drug above the specified limit.

The court heard how Atkins was three times over the limit for cocaine when his blood was tested following his arrest at the scene on March 5.

He decided to represent himself at Chelmsford Magistrates’ Court and wore a black polo shirt and grey jeans.

Atkins, of Romford, London, said: “I accept the charges. The night before I had a heavy night. I don’t usually do it, I’ve got a job in the car industry.

“I think I must have put my foot down too hard on the pedal and I lost control.

Atkins had crashed the sports car into a barrier in Chelmsford, Essex, and he was found to have 158 microgrammes per one litre of benzoylecgonine, a derivative of cocaine, in his blood. The limit is 50 microgrammes.

The prosecution representative for the CPS said: “At 11.30pm, the car was being driven from the Miami roundabout at New London Road along Princes Road when he lost control of the vehicle.

“An on duty officer in full uniform was called to reports of a single vehicle collision between a purple Lamborghini Murcielago and some railings on the other side of the road.

“The fire service and police attended. The vehicle caught alight. He was tested for alcohol but tested negative. He did, however, test positive for cocaine.

“He was arrested and taken to Chelmsford police station, where he consented to a blood sample, which confirmed the initial test.”

Atkins, who works for Bromley classic car dealership Samuel Laurence, said he manoeuvred the car to the side of the road after noticing the vehicle was on fire.

The magistrates were shown a letter from his boss, although its contents were not read aloud in court.

But it was confirmed the vehicle, which can accelerate from 0-60 in under four seconds, was a company car and Atkins was fully covered to drive it.

Passing motorist George Brewster, from Ingatestone, Essex, managed to capture some close-up pictures of the burning Lamborghini, worth hundreds of thousands of pounds, at the time.

He said: “I couldn’t believe how much heat I could feel inside my own car as I drove past, the heat was immense, even with my windows fully closed.

“After I’d driven past I was just hoping the paint hadn’t melted on my Focus ST.

“There were only two men there on the other side of the road to the inferno, watching it burn,” added George, who witnessed the blaze at 10.58pm.

During sentencing, Atkins was disqualified from driving for 24 months, was ordered to carry out 150 hours of unpaid work in the community within 12 months and was also ordered to pay £85 in costs and a £60 victim surcharge.

Car dealership Samuel Laurence have been contacted for a comment.

It is not known whether Mr Arkins is still employed by the dealership.