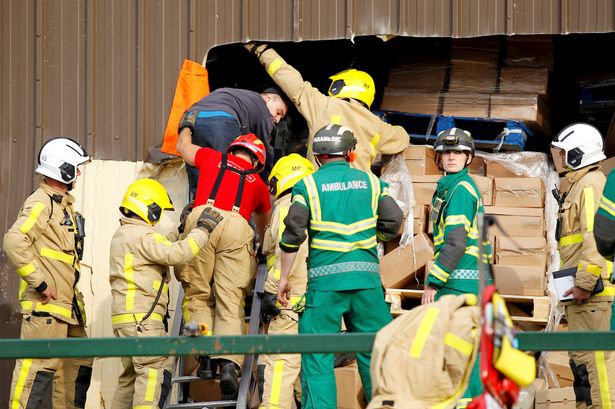 This is the moment a forklift truck driver was miraculously pulled to safety by firefighters after getting trapped under tonnes of CHEESE.

He was feared dead after being buried under a mountain of 20kg blocks of cheese following the warehouse collapse at Edwards Transport in Hinstock, Shrops.

A staggering 55 tonnes of cheddar and Red Leicester tumbled down “like dominoes” from 18ft high metal shelves sparking a multi-agency search operation on Friday (6/5).

Dramatic footage shows the moment Mr Wiszniewski emerged unscathed from the debris, which had come crashing down on him as he was operating a forklift truck.

In the 12-second video, a firefighter can be heard asking him: “There’s no-one else in there, there was only you in there wasn’t there?”

The clearly shaken Polish national looks up and answers: “Yes”.

Rescuers then lead him to safety, saying “Come on, then. Come and sit here for a second”.

Mr Wiszniewski – who is from Telford, Shrops., and due to marry later this year – was freed following an operation involving 13 fire crews, and a total of 70 firefighters from across three counties.

Family and colleagues waiting outside cheered when they saw him walk out and he was taken to hospital as a precaution.

He added that getting to the trapped man was like “crawling over rubble, but rubble made of giant blocks of cheese”.

Debbie Belcher, 48, the daughter of warehouse owner Francis Edwards, said at the time: “It’s a miracle – he walked out. I think you can feel here the sense of relief.

“We will definitely be looking into what happened, but we have to wait for the reports until we see what happened.”

Co-workers had earlier described how the shelves had tumbled “like dominoes”.

One said: “It was terrifying. Everybody just ran for their lives.

“The noise was deafening. it was like a sonic boom or an earthquake.

“I thought the whole place was going to come down and crush us all.”