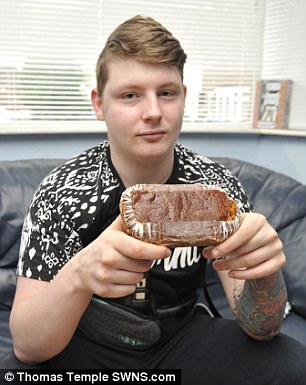 Motorcyclist Reece Jefferies says he owes his life to JAMAICA GINGER CAKE after one hin his rucksack saved him from being seriously hurt in a horror smash.

The 18-year-old warehouseman was heading to work for a night shift at 5pm when a car darted out in front of him from a side road.

He was forced to brake suddenly but hit the rear of the car and was sent flying and fell on his back in the road.

Reece landed on his back – but luckily his rucksack filled with food lovingly prepared for his shift by mum Gillian saved him from serious injury.

His cheese and ham sandwiches, packet of crisps and his favourite McVities ginger cake were all flattened in the impact.

But Reece has held onto the cake and is storing it in the fridge to show visitors and wellwishers.

He said: “All the food was totally squashed. The crisps popped and were all over the floor, the sandwiches were demolished and the ginger cake has been flattened.”

The teenager from Bolton, Greater Manchester, was laid out on the ground for around 15 minutes until an ambulance came.

While in the back of the ambulance – with a head brace on – he took a selfie and posted it to friends on social media site Snapchat.

He added: “I was in a lot of pain but it’s not every day you’re strapped up the back of an ambulance.”

When he arrived at Royal Bolton Hospital he found out he had broken his back and his pelvis.

He was in hospital for four days before being released and has been fitted with a back brace.

He is being looked after by his mum, step-dad, three sisters, brother and girlfriend, Molly Smith, 16.

Reece said: “It is a bad injury, I have to rely on everybody to get about and get up and get bathed.

“It’s lucky I have a close family, who are around me and helping. My girlfriend is helping out a lot.”

Reece said he really likes Jamaica Ginger Cake and he often takes one to work for his lunch.

He said: “I don’t always eat the whole cake at once, it really depends on how hungry I am. I quite often eat it throughout the duration of my shift.”

The teenager has been riding bikes since last January and purchased his latest, the Honda Repsol, for £2,100.

The engine still works but the front of the bike is completely smashed in. It’s not rideable.

Despite the accident, Reece is keen to get back on the bike as soon as he can, though his mum, who doesn’t like him riding a bike in the first place, wishes he would stop.

“My mum told me that when she got the call, she knew it was going to be me on the bike,” said Reece.

“But I’ll never stop, I love it. I’ll just make sure to always have my lucky ginger cake on me.”