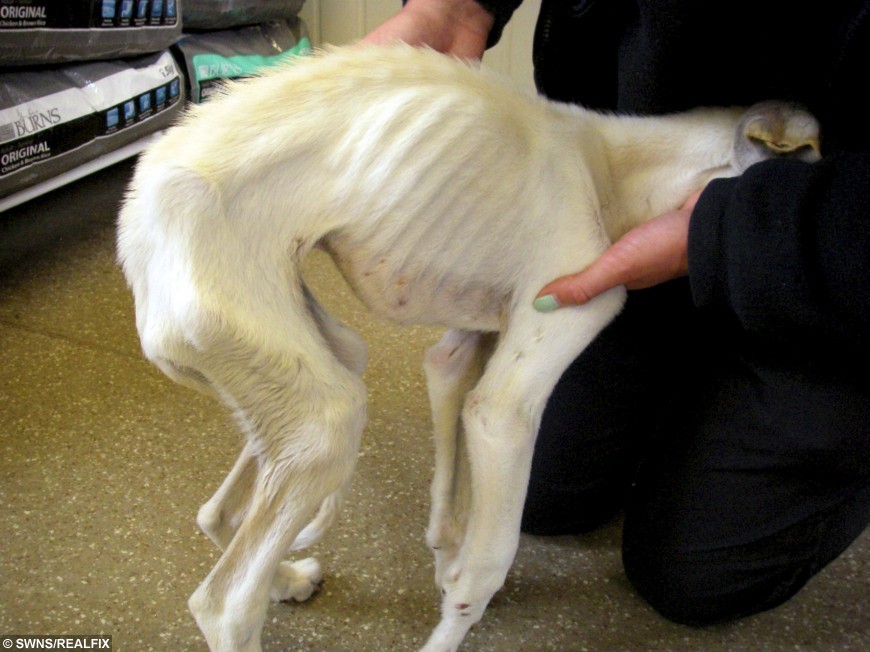 A puppy who was described as the thinnest dog an RSPCA inspector has ever seen is on the road to recovery after being rehomed by a loving family – and is set to be a TV star.

Just eight months ago, shocking photos of William, a greyhound-saluki cross, hit the headlines after he was handed into an RSPCA branch in Coventry, West Mids., in a severely emaciated state.

When he was found, he weighed just 3kg – the same as a small cat – and was close to death.

The then-six-month-old puppy could not stand up and was classed as severely emaciated to the point of starvation.

But now William has made a remarkable recovery and after being adopted by Rachel Butler and Chris Mallett, from Castle Ward, Derby.

William is also set to be the star of the show at a parade-style dog walk this weekend.

He lead the RSPCA’s Big Walkies – a huge sponsored dog walk – in the south coast town of Bournemouth on Sunday (22/5).

Rachel, 28, who works as a press officer for RSPCA, said: “William has been chosen as a ‘hero’ dog for the walk, which basically means he is the poster boy for the event.

“William will be in the ‘rehoming hub’ at some point during the day, where people can meet him and ask us as his owners what it is like adopting a rescue dog.

“He was starved by his previous owners and nearly died, so it’s amazing that he now looks as well as he does.”

William is also set to appear on TV next month for Channel Five’s Dog Rescuers programme after filming took place at his new home and Coventry RSPCA.

Rachel added: “They came to film at our house a couple of months ago. William loves people so he was quite happy to be on camera.”

In January, a Coventry couple were sentenced to 12 weeks in prison, suspended for 12 months, after pleading guilty to causing unnecessary suffering to William.

But after the pair failed to research how to look after a puppy or how much to feed him, William lost so much weight that he became seriously ill.

As well as suffering from starvation, William was also anaemic and dehydrated when he was taken into the RSPCA’s care.

RSPCA inspector Nicky Foster, who investigated the case, said: “This would never have happened if they had done their research before getting him.

“Getting a dog should never be done on impulse, and this is evidenced by what happened to William.

“It is heartbreaking to think that, because of this, four months ago he was close to death.

“Thankfully, William has made a fantastic recovery and has now been rehomed with a family who dote on him.”

The Big Walkies event is the biggest series of dog walking events in England and Wales, and raised over £100,000 last year.