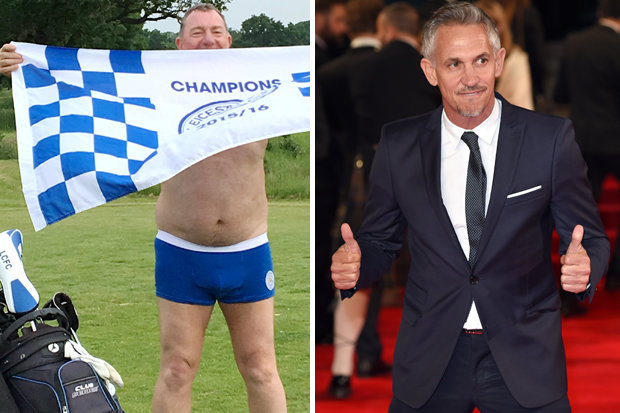 A football mad Leicester City fan has challenged Gary Lineker to present Match of the Day in his underwear – by playing a round of golf in his PANTS.

John Guest, 53, promised to play 18 holes in his briefs if the Foxes won the Premier League, and made good on his pledge last Saturday (11/6).

Now the construction manager hopes former Leicester City striker Lineker will keep to his word and present the BBC show in his boxers.

John made his bet after being inspired by the football pundit’s notorious Twitter vow in December last year.

His wife, Maimie, took pictures of her husband as evidence as he played at Wokefield Park Golf Club in Reading, Berkshire.

John, of Mortimer, Berkshire, said: “I was away on holiday and had just watched Leicester City beat Everton to be top of the table at Christmas.

“I phoned the captain at my golf club and said I would play a full round in my undies on captain’s day if City won the league.”

Maimie bought the exact same Shreddies flatulence-filtering pants for John that have been given to Lineker.

John, who has been a Leicester City fan since he was five, said: “I was a goalkeeper and Peter Shilton was my hero.

“He is why I have supported Leicester City for 48 years.

“I have taken some stick over the years living in Berkshire with all the Spurs and Arsenal fans.

“But this season has been amazing, the stuff of dreams. I was more than happy to wear the undies after the committee at Wokefield Park Golf Club gave me the go-ahead.

“They are the same ones Shreddies have given to Gary Lineker but I think his pair might be a size smaller.

“I hope Gary does the right thing and follows my lead.”

A Shreddies spokeswoman said: “We thought it would be brilliant for somebody to show Gary Lineker how to honour a bet.”