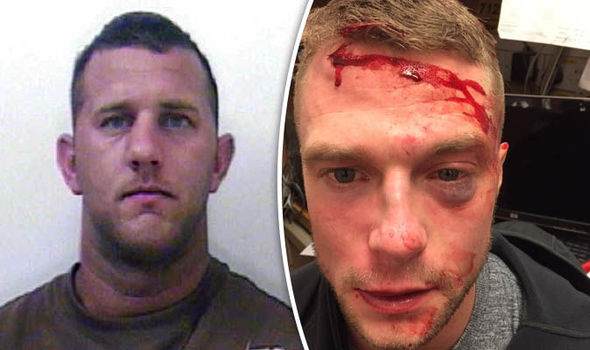 A thug who celebrated with champagne on social media after escaping prison following a ‘cowardly’ attack on a marine has been hauled back to court – and JAILED.

But just hours after avoiding jail Scott went on Facebook to post a picture of a £140 bottle of Louis Roederer Cristal 2007 saying it was ‘time to celebrate’ and ‘I win’.

Alongside the picture of the bubbly, he gloated: “Real decent people prevail in the end and that scum Marc Jolly can stay at the bottom of my shoe where he belongs. I win.”

Marc, 27, said the attack, which took place on Christmas Eve as he visited his family in Camborne, Cornwall, had left him frightened to return home and said he felt safer fighting the Taliban.

But following public outcry and an angry backlash from the military that Scott claims forced him to close his building business, he was recalled to Truro Crown Court today. (Wednesday)

He faced Judge Harvey Clark QC, who originally spared him prison, but this time he was given a 12 month sentence, half of which will be spent behind bars.

He had previously been given a six and a half year sentence in 2010 for conspiracy to supply cocaine.

And he said Scott “must face the consequences of his stupid and arrogant behaviour.”

Following the hearing, Marc, who served in Afghanistan with 42 Commando, said: “It’s good to know that he has finally got the sentence he deserves but I don’t think he is the kind of person who will drop it just like that.

“His facebook post was disgraceful and made a mockery of the justice system so he should now just get on with it and do the time and then we can all put all of this behind us and move on with our lives.”

Scott attacked his victim from behind, stamping and kicking him at least 14 times that left him with three head wounds.

Marc had said that the attack on the streets of his home town had left him more scared than he had been whilst serving in Afghanistan.

He said: “It really did affect me. I didn’t go home for quite a few months. I didn’t want to walk around and bump into him.

“I didn’t feel comfortable going back to my home town, when I’d done nothing wrong.

“The first time was a couple of weeks ago, and I didn’t feel safe.

“I’d rather be back in Afghanistan. At least you know what you’re getting into – you’re prepared for it – but you don’t expect someone to come up and hit you on the back of the head.”

The attack occurred only a few months after a fellow British soldier, Dave Curnow, had been attacked and killed.

Police in Camborne had said that the attack on Marc was ‘incredibly cowardly’ and felt his gloating Facebook post showed a ‘complete lack of disregard for the courts.’

Before being sent back to prison Scott, 31, of Camborne, said he regretted his “stupid” behaviour.

He claimed he and his family had received hundreds of abusive messages and threats from military personnel that had forced him to close his business which he says put ten people out of work.

He added: “I think it has gone too far now. It has got ridiculous. I have had to fold my company as a result which has put 10 men out of work and everyone close to me is being threatened with violence.

“Of course, I regret what I did. I have tried to apologise to Marc but he did not accept it.

“I did put a stupid post on facebook and looking back I don’t know what I was thinking.

“But all the stress of the case had built up and I did a very stupid thing.”